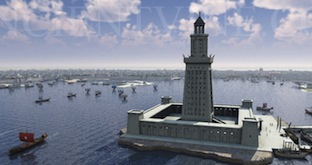 According to a new research, the ancient city of Alexandria may have been built around a solar event occurring during Alexander the Great’s lifetime. Researchers used simulation software to plot the rise of the sun for the day he was born. They found that the “King’s Star” Regulus, located in the head of the constellation Leo, rose in a similar alignment. The researchers note that it was a common practice in ancient times to base architectural designs on astronomical events, pointing out that the Great Pyramid in Giza has been found to be aligned along compass points.

The Macedonian empire builder, who conquered a swathe of territory stretching from Greece to Egypt in the west, to as far as the Indus River in the east, founded the city on Egypt’s Mediterranean coast in 331 BC. This research shows that on Alexander’s birthday the main east-west thoroughfare of the ancient city was in almost perfect alignment with the rising sun of the fourth century.

Giulio Magli, an archaeoastronomer at the Politecnico of Milan, hopes his results could help researchers in the hunt for Alexander’s tomb, the location of which still remains unknown. Historians and archaeologists have been studying Alexandria in an attempt to locate the Macedonian king’s tomb, which is believed to be in the city in a gold casket inside of a glass sarcophagus. This new research, they believe may help find it.

Today a modern city home to four million people, Alexandria was in ancient times hugely prosperous and home to the Lighthouse of Alexandria and the Library of Alexandria -two of the seven Wonders of the Ancient World.