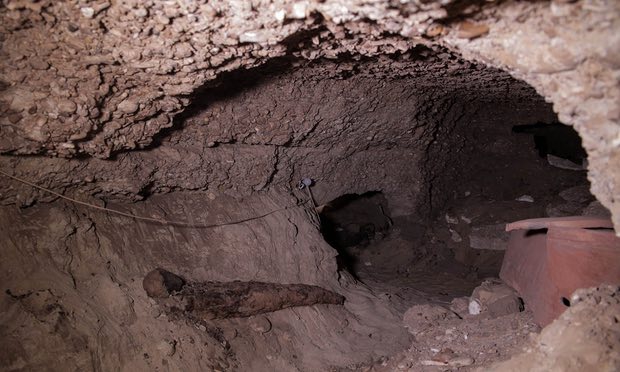 An Egyptian archaeological mission has found a necropolis holding at least 17 mummies near the Nile Valley city of Minya, in the first such find in the area, the antiquities ministry said on Saturday.

The discovery was made in the village of Tuna al-Gabal, a vast archaeological site on the edge of the western desert. The area hosts a large necropolis for thousands of mummified ibis and baboon birds as well as other animals. It also includes tombs and a funerary building.

“It’s the first human necropolis to be found here in Tuna al-Gabal,” antiquities minister Khaled al-Anani told reporters at the site, 220 kilometres (135 miles) south of Cairo. The mummies were elaborately preserved, therefore likely belong to officials and priests, he said.

The necropolis, which is eight metres below ground level, dates back to the late period of ancient Egypt and the Greco-Roman period, the minister noted.

Pointing to the edges of the necropolis where legs and feet of other mummies could be seen, the minister said the find “will be much bigger,” as work is currently in only a preliminary stage.

The discovery comes as Egypt struggles to revive its tourism sector, partially driven by antiquities sightseeing, which was hit hard by political turmoil since the 2011 uprising.