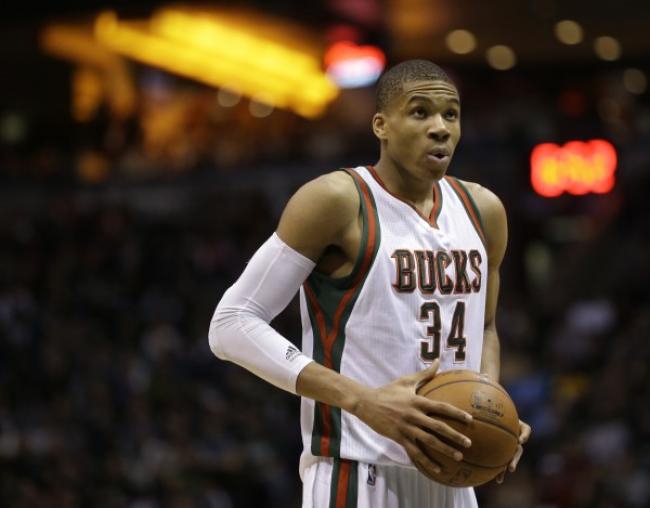 Giannis Antetokounmpo had a smile on his face the entire weekend at NBA All-Star in New Orleans.
From the moment the Bucks’ forward walked into his media availability session on Friday, he was astounded at the reception he received.
“This is amazing. I gotta take a picture of this before we start,” Antetokounmpo said as he saw the number of journalists, including a dozen or so from Greece, waiting at his table.
“This is crazy,” he continued. “I haven’t seen so much media in my life.”
Antetokounmpo’s historical selection as an All-Star starter was made even more impressive when he finished his debut game as the East team’s leading scorer with 30 points − more than players such as Lebron James and Kyrie Irving − and could have even won the award as the game’s Most Valuable Player had the East been able to defeat the West. They lost 192-182.
“You know, at the start of the game, I was just hoping I could get a bucket, to not embarrass myself and just have fun,” he said post-game. “It was fun. I told the coach I’m going to play hard no matter what. That’s the only thing I know how to do.”
Golden State Warriors’ superstar forward Kevin Durant said that Antetokounmpo will have a presence at every All-Star game from now on.
“That’s a big compliment coming from KD,” said Antetokounmpo when told of Durant’s comments.
“I believe I can be here as long as I play basketball. The most important thing is that I believe it. I appreciate the compliment from KD. I’ll try to be here every year because this is fun.”
Antetokounmpo made history by being the first ever Greek voted to the NBA’s showcase event, and his selection served a purpose greater than just basketball − it was also a celebration of Hellenism.
He answered questions in Greek during Friday’s media session and even told the reporters from Greece that he would prefer an international gold medal to an NBA MVP award or title.
His reason? “Because it will represent an entire country,” he said. At every opportunity he spoke of the appreciation he has for the support he has received from Greeks worldwide.
“Whatever I do, I have Greece behind me,” he said. “I try to make all Greeks proud and I thank them for their support.”
Antetokounmpo’s ascension from peddling bootleg CDs on the streets of Athens to being selected by the Milwaukee Bucks with the 15th pick in the 2013 draft to now, representing his team and country at the All-Star game − repeatedly over the weekend Antetokounmpo alluded to “living the dream”.
“This story and this journey is incredible,” he said after the game. “A lot of people helped me. My family was right there for me.”
Despite his impressive showing in the game on Sunday, all Antetokounmpo said he wanted to do was soak it all up with his family − older brother Thanasis, younger brothers Alex and Kosta, and his parents, Veronica and Charles.
“The highlight for me [was] seeing my family after the game on the court, taking pictures with all the celebrities out there,” he said. “Just the smile on their faces, how excited they are to be here. I think that’s the highlight.”
Still, even after all the adulation of the weekend, and the memories it created, Antetokounmpo is ready to get back to work and help the Bucks reach the playoffs.
“I was talking with [Milwaukee’s assistant] coach today and I told him, ‘I can’t wait until we get back and I start practicing and playing games’.”