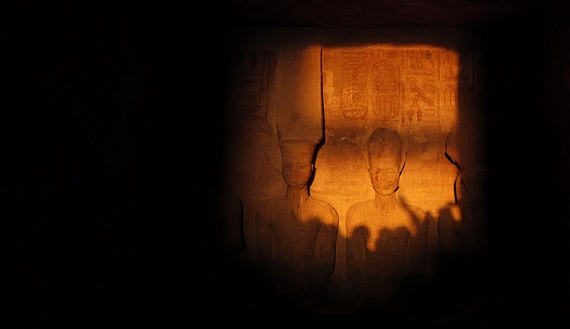 Ancient Egyptians were known for their scientific excellence and genius, especially in the fields of astronomy, sculpture and construction. For instance, the three pyramids are considered among the Seven Wonders of the World. Pharaonic arts and antiquities still hide secrets that no scientists have managed to explain or understand.

Every year, a Pharaonic miracle has been happening for 33 centuries.

At the main entrance of the Great Temple of Ramses II at Abu Simbel in Aswan governorate, a solar alignment is witnessed on the face of the King Ramses II statue twice a year, once on his birthday, Oct. 22, and again on his coronation day, Feb. 22.

Ramses II built his temple, which took 19 years to complete, in 1275 B.C. At the same time, the king inaugurated another temple for his wife, Queen Nefertari, who was said to be the most beautiful among Pharaonic queens. He ordered her shrine to be located near his own, on a mountain overlooking the Nile.

King Ramses II, of the ninth Pharaonic family, was born in 1315 B.C. He came to power in 1290 B.C. and gained wide popularity for several reasons. For one, he acceded to the throne when he was a young, ambitious and enthusiastic man and remained king for 67 years. He also inherited a strong and rich country from his father who taught him the arts of war, rule and politics.

Civilians and soldiers supported him, and he defeated the Hittites, the largest military power at the time. He was passionate about immortalizing his memory and honoring himself. For that purpose, he built more shrines, palaces, statues and obelisks than any other ruler before him. During his reign, Egypt built a new capital called Pi-Ramesses, which became one of the most important capitals of the ancient Near East.

When the sun shines, its rays creep into his deep shrine, which is about 60 meters (197 feet) from the entrance, to illuminate it. The aim is for the sun’s rays to fall on Ramses II’s face from the east from a narrow opening.

British explorer Amelia Edwards and her team detected this phenomenon in 1848, and she recorded it in her book “A Thousand Miles Up the Nile.” She wrote, “The statues of Abu Simbel Temple gain huge influence and are surrounded by an aura of praise and respect when the sunrays shine and set on them.”

Al-Monitor attended the Aswan governorate’s celebration of the phenomenon. According to Aswan Gov. Magdy Hijazi, the governorate holds several artistic and cultural events for the occasion.

“This year, the celebration was more organized, given the development of the work and performance to suit its grandiosity,” Hijazi told Al-Monitor. He noted that the event was made possible in coordination with the Ministry of Tourism, Antiquities and Culture in Aswan. “The governorate was spending large sums of money on the celebrations of solar alignment in the past, but it is currently agreeing with other parties to support and improve the celebrations as part of the expenditure rationalization policy,” he said.

The celebration marked the beginning of the fifth Aswan International Festival for Arts and Culture, in which 17 folk art troupes participated, including ones from China, India, Greece, Sudan, Nigeria, Armenia, South Korea and Thailand.

Among those who participated in the event were Minister of Antiquities Khaled El-Enany, Minister of Culture Helmy al-Namnam and Minister of Tourism Yehia Rashed. About 4,000 people attended the solar alignment event, including 1,500 tourists.

The first Aswan International Women’s Film Festival coincided with the solar alignment and was launched over six days under the patronage of the Ministry of Culture and the Ministry of Tourism. The festival’s prize statue comes in the shape of the ancient Egyptian goddess of the moon and motherhood, Isis.

Mohammad Idriss, the general manager of the Ministry of Culture in Aswan, told Al-Monitor, “The festival program includes performances from the participating troupes. It took place in several cultural locations and youth centers in the governorate.”

In a Feb. 6 press statement, Houssam Abboud, the director general of Abu Simbel antiquities at the Ministry of Antiquities, said the ministry took great efforts to prepare the celebrations for the occasion, which is a boon for tourism.

He added that the solar alignment phenomenon stems from the ancient Egyptian belief that King Ramses II was intricately connected to the sun god Ra.

Residents of Abu Simbel also participated in the celebration and promoted their city. They held an exhibition to display their antiquities and city folklore, as well as handicrafts from the families of tribes in Abu Simbel to reflect their culture to foreigners and Egyptians.

Aswan University participated in this global event by sending students from the Faculty of Linguistics to help guide foreign tourists who attended the celebrations.