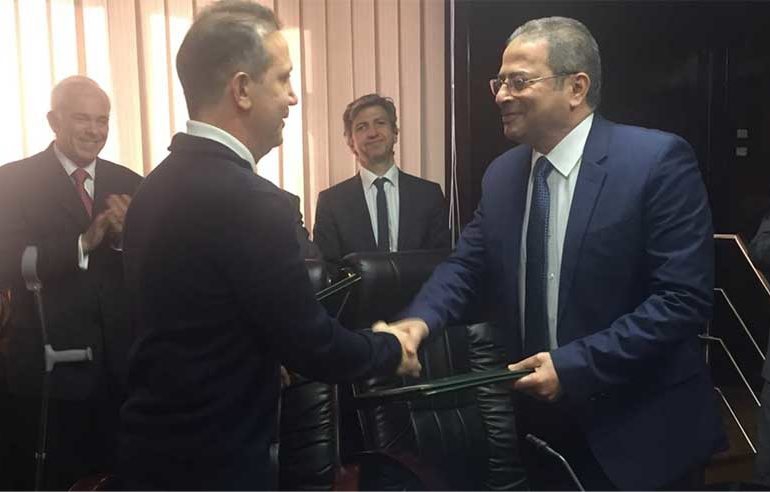 The EuroAfrica Interconnector, a planned subsea electric cable connecting the Egyptian, Cypriot and Greek power grids to continental Europe has entered a crucial phase of conducting project studies with a signing ceremony for a memorandum of understanding among all parties having taken place on Monday.

The officials attending the signing ceremony in Cairo endorsed their commitment to implementing the EuroAfrica Interconnector energy bridge connecting Egypt, Cyprus, and Greece with the European electric network with 2000MW.
The aim of EuroAfrica is to offer significant economic and geopolitical benefits to the involved countries and contribute to the European Union’s target for 10 per cent of electricity interconnection between member states.

President of EuroAfrica Interconnector Nasos Ktorides said that this inspired partnership can only bring benefits to the three participating nations.

“Greece will increase its energy efficiency, and will become a major player in the European energy arena, Cyprus will be an electricity hub in the south eastern Mediterranean and Egypt will become an important energy hub for Africa and electricity carrier for the European continent,” he said.

In a packed news conference attended by the highest officials of Egypt’s ministries of Energy, Electricity and Foreign Affairs, the Egyptian minister of Electricity and Renewable Energy Dr Mohamed Shaker highlighted the importance of the submarine electric cable as part of his country’s strategic plan for economic development and energy security.

Shaker emphasised both his personal commitment and that of the Egyptian government to bringing this great venture to fruition.

Earlier, Egyptian President Abdel Fattah El-Sisi called a meeting with Prime Minister Sherif Ismail and Shaker, where he expressed the government’s commitment to the project.

Shaker announced after the meeting that El-Sisi requested that he be regularly informed on the progress of the project on a weekly basis and to ensure that the whole project is successfully completed within the desired timeframes.

At the signing ceremony, the Egyptian power company chief Gaber Desouky described it as an historic moment, which brings Egypt closer to the day when it is connected to the pan-European electricity grid.

In a brief address, the ambassadors of Cyprus, Charis Moritsis, and Greece, Michael Christos Diamessis, also expressed the support of their governments in taking the project forward.

The conclusion of the necessary studies will mark the beginning of the implementation of the interconnector electric cable, which is expected to bolster the three countries’ energy security and independence, and allow them to export power to European countries with an energy deficit.