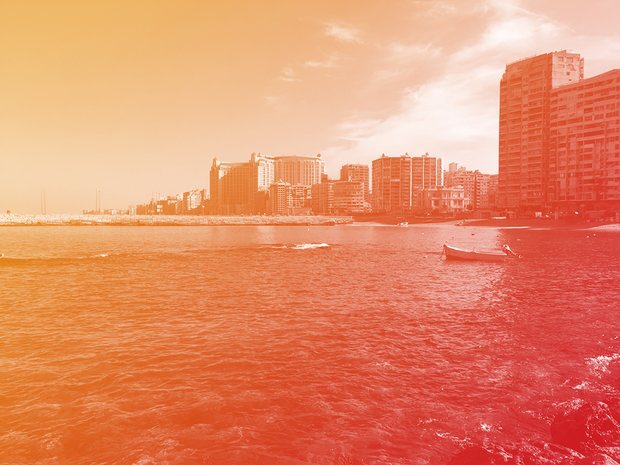 “Before we were flooded a couple of years ago, we didn’t imagine the water could reach this level,” said cafe manager Samir Gaber, gesturing at a cluster of tables overlooking the Mediterranean.

Gaber has managed the Latino cafe in Alexandria for six years, during which time the business has had to adapt to increasingly dramatic winter storms. With the storms come the floods, crashing waves engulfing large chunks of the many cafes nestled on the coastline.

“There was another wall here before the flooding, but the steel bars [supporting it] were destroyed,” explained Gaber. “Now we’ve constructed a drain to absorb floodwater,” he said, gesturing below the new stone wall running along the outside edge of the cafe.

Many of the cafes and businesses on the Alexandria coast have begun adjusting to extreme weather without making the link to climate change.

On the southern tip of the Mediterranean, the coastal waters are inching closer to buildings and flooded ancient structures, including the Greco-Roman tombs at Anfushi. Seawater seeping into the groundwater has also made the fragile ground more unstable, resulting in the alarming collapse of some of the city’s buildings.

The UN estimates that global sea levels will rise between 13cm and 68cm by 2050, and say that the Mediterranean is particularly vulnerable – by 2080, up to 120,000 people living near the sea could be affected by rising waters if no action is taken to protect them.

Rising sea levels and seawater temperatures will also increase the salinity of the Nile, Egypt’s primary water source, and increasingly salty water sources could destroy farmland across the Nile Delta. In 2007, the World Bank estimated that 10.5% of Egypt’s population could be displaced by rising waters caused by climate change.

An hour to the east from Alexandria, the quiet of the town of Rosetta ignores the urgency of the lapping waters. Life in the town, famed for the discovery of the Rosetta stone, is at one with the sea.

“You have to do what you have to do, and don’t think about the bad weather – the good weather comes from God,” said fisherman Ahmed Mohamed Gowayed, reciting a local saying.

Storms annually disrupt the calm of this low-lying town where houses sit at sea level, many only separated from the coast by a winding coast road. But in recent years the weather has been more violent.

“Last year the storm destroyed palm trees, buildings, cars – older people in their seventies said they’d never seen anything like it in their lives,” said Gowayed. The storm also destroyed barges and kiosks that local fishermen rely on for their livelihoods.

“If the weather continues like this I will build a stronger kiosk,” smiled Gowayed, undeterred by the prospect of the next storm.

Mohamed El Raey, professor of environmental studies at Alexandria University, believes that climate change is contributing to an increase in “extreme events”, across Egypt. “The government needs to increase awareness among the population,” he said.

They also need to be more stringent about urban planning, he added. “If people don’t find places to live that they like, they build houses wherever they find an area.”

In 2011, the government released a report detailing how the country must adapt to climate change, estimating that about 13% of Egypt’s northern coastline was at risk.

Political and economic upheavals have since diverted their attention elsewhere, but in Alexandria and Rosetta the impact of climate change is becoming increasingly hard to ignore.