Moody’s expects economic growth for Egypt by 4% in 2017 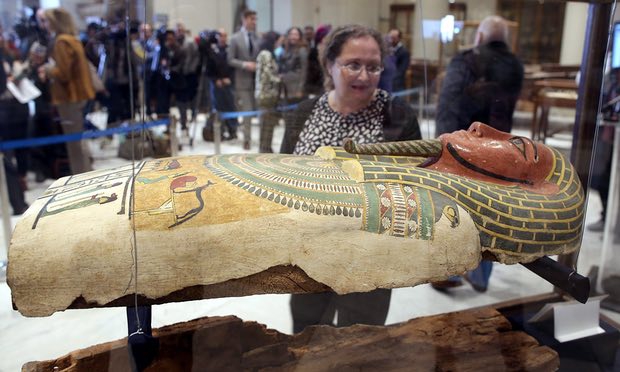 Egypt will restore hundreds of coffins dating back thousands of years to the time of the pharaohs as part of an American-Egyptian project to preserve and document one of the world’s oldest civilisations, a director of the project said.

The conservation effort, funded by a US grant, will restore more than 600 wooden coffins that date to various eras of ancient Egypt and which are currently stored at the Egyptian Museum in Cairo.

“There has been no other project like this worldwide, with this number of coffins being documented or restored,” said head of the museum’s restoration department, Moamen Othman.

Egypt was awarded the conservation grant worth $130,000 (£105,000), in December 2015. That project is part of a larger US-Egypt treaty signed in 2016 to curtail illicit trafficking of the country’s rich cultural heritage.

Antiquities theft flourished in Egypt in the chaotic years that immediately followed its 2011 uprising, with an indeterminate amount of heritage stolen from museums, mosques, storage facilities and illegal excavations.

Global interest in Egypt’s pharaonic era remains high. The hunt for the resting place of the lost queen Nefertiti grabbed international headlines in 2015, though the search has yet to bear fruit.

The gilded ancient relics and resting sites of the pharaohs were once the cornerstone of a thriving tourism sector, a vital source of foreign currency, that has suffered setbacks since the uprising that toppled Hosni Mubarak in 2011.

The Ambassador’s Fund for Cultural Preservation (AFCP), a US programme founded in 2001, has been responsible for the conservation and restoration of countless ancient sites, museums and artefacts around the world.

The fund previously helped Egypt to conserve a mausoleum in historic Cairo and an ancient temple in upper Egypt.

“One of the main goals of the project is to ensure that the [Egyptian] Museum has a full inventory of the objects and understands their conservation needs so that the coffins can be made available for research by scholars but also for the public,” AFCP programme director Martin Perschler said.

“It means that in the long run more people here in Egypt and people from around the world will have the opportunity to discover and appreciate the full range of heritage and of history within this single collection of coffins.”