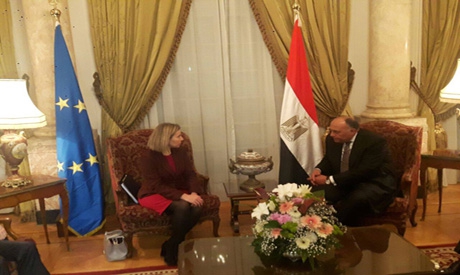 Egypt’s Minister of Foreign Affairs Sameh Shoukry met on Tuesday with High Representative of the EU for Foreign Affairs and Security Policy Federica Mogherini in Cairo where they discussed a number of international issues, the foreign ministry said on Tuesday.

A statement by the ministry’s spokesperson said that Shoukry and Mogherini discussed Egyptian-EU relations as well as coordination between Egypt and the EU in facing various regional crises.

Shoukry also spoke with Mogherini about Egypt’s economic reform programme as well as the fight against terrorism and the regional migrant crisis.

Federica Mogherini relayed to Shoukry the EU’s stance on the situation in Syria and expressed the EU’s support of Egypt’s efforts in fighting radicalism.

The meeting came on the sidelines of the fourth joint meeting between Arab foreign ministers and their European counterparts, which took place at the Arab League headquarters in Cairo.