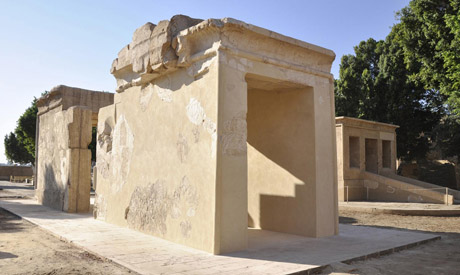 The Centre Franco-Egyptien d’Etude des Temples de Karnak (CFEETK) (French- Egyptian Centre for Karnak Temples Studies) has finally completed the restoration work on the barque shrine of King Tuthmosis III, which was reconstructed in 2010 at the Open Air Museum of Karnak Temple.

Mahmoud Afifi, the head of the ancient Egyptian Antiquities Section at the Ministry of Antiquities said that after its reconstruction in 2010, the most delicate operation was then conducted which aimed to replace the fragments of the ceiling slab and of a lintel, which were broken in many fragments.

French Egyptologist Christophe Thiers, director of the CFEETK, said that this operation, performed manually with the aid of hydraulic jacks and temporary walls has enabled the progressive lifting of the ceiling slab, which weighs 76 tons, on the top of the walls

The slab was then moved laterally on the walls and has regained its original location. The latest work of cleaning and conservation has been completed — the bark shrine of Thutmosis III is now ready to be opened for visitors at the Open Air Museum of Karnak.