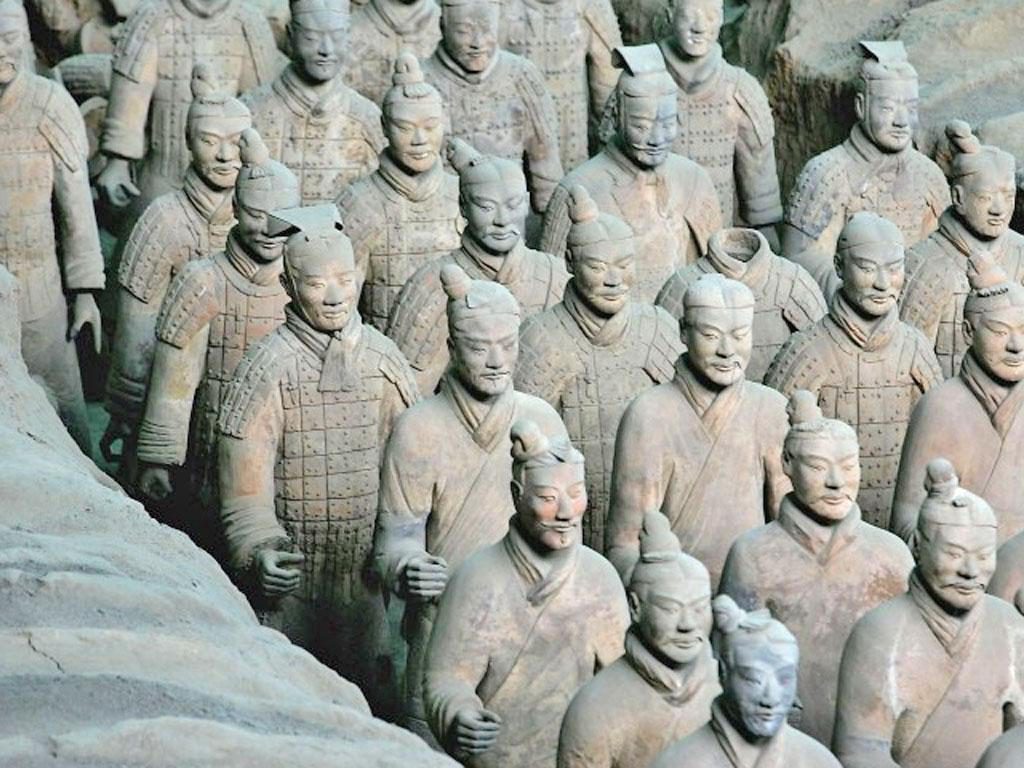 Ancient Greeks artists could have travelled to China 1,500 years before Marco Polo’s historic trip to the east and helped design the famous Terracotta Army, according to new research.

The startling claim is based on two key pieces of evidence: European DNA discovered at sites in China’s Xinjiang province from the time of the First Emperor in the Third Century BC and the sudden appearance of life-sized statues.

Before this time, depictions of humans in China are thought to have been figurines of up to about 20cm.

But 8,000 extraordinarily life-like terracotta figures were found buried close to the massive tomb of China’s First Emperor, Qin Shi Huang, who unified the country in 221BC.

The theory – outlined in a documentary, The Greatest Tomb on Earth: Secrets of Ancient China, to be shown on BBC Two on Sunday – is that Shi Huang and Chinese artists may have been influenced by the arrival of Greek statues in central Asia in the century following Alexander the Great, who led an army into India.

But the researchers also speculated that Greek artists could have been present when the soldiers of the Terracotta Army were made.

One of the team, Professor Lukas Nickel, chair of Asian art history at Vienna University, said: “I imagine that a Greek sculptor may have been at the site to train the locals.”

Other evidence of connections to Greece came from a number of exquisite bronze figurines of birds excavated from the tomb site. These were made with a lost wax technique known in Ancient Greece and Egypt.

There was a breakthrough in sculpture particularly in ancient Athens at about the time when the city became a democracy in the 5th century BC.

Previously, human figures have been stiff and stylised representations, but the figures carved on the Parthenon temple were so life-like it appeared the artists had turned stone into flesh.

Their work has rarely been bettered – the techniques used were largely forgotten until they were revived in the Renaissance when artists carved statues in the Ancient Greek style, most notably Michelangelo’s David.

Dr Li Xiuzhen, senior archaeologist at the tomb’s museum, agreed that it appeared Ancient Greece had influenced events in China more than 7,000km.

“We now have evidence that close contact existed between the First Emperor’s China and the West before the formal opening of the Silk Road,” the expert said.

“This is far earlier than we formerly thought.

“We now think the Terracotta Army, the acrobats and the bronze sculptures found on site have been inspired by ancient Greek sculptures and art.”

And Professor Zhang Weixing, lead archaeologist at the tomb site, said: “The archaeological work undertaken here recently is more important than anything in the last 40 years.

“By systematically examining the First Emperor’s main tomb and subsidiary burials we have discovered something more important even than the Terracotta Army.”

The mitochondrial DNA samples revealed Europeans had settled down in China and died there during the time of the First Emperor and even before then.

Hamish Mykura, of the National Geographic Channel, which made the documentary with the BBC, said: “The scope of these archaeological finds and what they mean for world history are astonishing.

“The new revelation that two of the world’s ancient super powers may have been in contact is a vital reminder today of the need for intercultural communication on a global scale.”

And BBC presenter Dan Snow said: “I hope audiences will find the new evidence as astonishing and thought-provoking as I did.

“It is extraordinary to think that history as we know it is changeable.”

The Terracotta Army – more than 8,000 figures buried less than a mile from the tomb – was found in 1974, but new geophysical survey evidence suggests the complex is much bigger than previously thought at 200 times the size of Egypt’s Valley of the Kings.

And the bones of 10 young women buried with precious jewellery made of gold and pearls have been found at the site.

Disturbingly, it is thought these women were the First Emperor’s concubines, who were murdered and mutilated as part of his funeral. There are 99 similar graves.

And the skull of a very high-ranking male was found with a crossbow bolt embedded in the back of the skull.

It is thought the bolt was fired at close range, suggesting the man was executed.

Chinese archaeologists believe it could be the remains of Prince Fu Su, the First Emperor’s eldest son, who was murdered along with his siblings by their younger brother Prince Hu Hai following their father’s death. The grave contains a total of seven different bodies, all of whom had been killed.