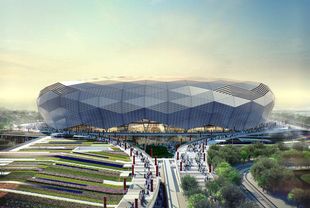 Cyprus-based contractor, Joannou & Paraskevaides (J&P), has been awarded the construction contract for the Qatar Foundation stadium, sources have revealed.

The stadium will have a tournament capacity of 40,000, and as with all proposed 2022 FIFA World Cup venues, will feature innovative cooling technology that will provide comfortable playing and viewing conditions for fans and players alike.

The design of the stadium will see light filtered through complex geometrical pattern and will be located at Education City.

RFA Fenwick Iribarren Architects is the design consultant for the QF Stadium, while Astad Project Management serves as the project manager.

The development of QF Stadium, and the associated Health & Wellness Centre, will be overseen by the Qatar Foundation Capital Projects Directorate.

“We have received the confirmation letter on Saturday, 16 July. We are yet to receive the official document, but we expect it will come next week. Further details will be revealed then,” sources told Construction Week.

The structure is intended to reference Islamic architecture. Both the interior and exterior will be clad in translucent triangular panels whose colour and patterns will shift throughout the day, depending on the position of the sun and influence of artificial illumination which will reflect the events happening from within the stadium.

Construction is expected to be completed by the third quarter of 2019.