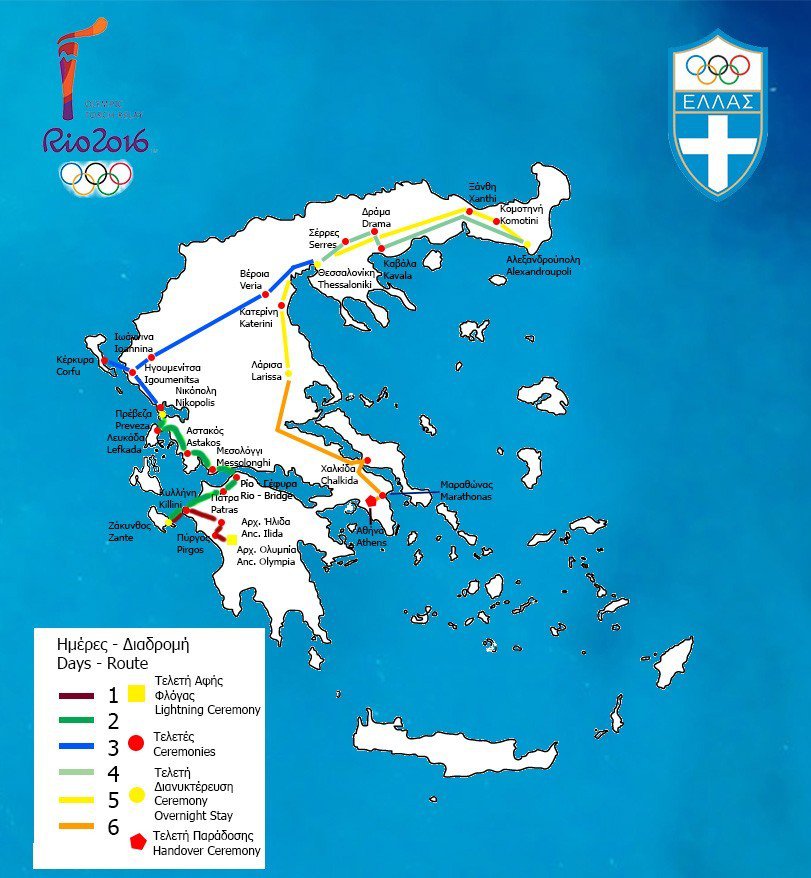 Organisers have revealed that the Olympic flame will visit Zakynthos, Corfu and the historic town of Marathon as part of a Greek odyssey before it is entrusted to the Rio 2016 Organising committee. As tradition dictates, the flame will be kindled from the rays of the sun in the ruins of Ancient Olympia on April 21 by Greek actress Katarina Lehou, in her role as High Priestess of the Goddess Hera. She also lit the flame for the 2014 Sochi Winter Games and the Youth Olympic Games in Nanjing and Lillehammer. She will be supported in the ceremony by a retinue of priestesses, who will wear costumes inspired by the Chiton, a dress worn in Ancient Greece.

This year, these have been designed by London born Greek-Cypriot designer Eleni Kyriacou, who trained under Alexander McQueen. They are accompanied by specially designed sandals and will be used at the flame lighting ceremony in Olympia and at the send off festivities in Athens. The relay to Rio also marks 80 years since runners carried a flame by hand from Olympia to Berlin for the 1936 Games and officials are encouraging as many Greeks as possible to turn out to support the flame and mark the anniversary. “The flame was first lit on Ancient Olympia’s sacred soil to illuminate the Modern Olympic Games,” said Hellenic Olympic Committee (HOC) President Spyros Capralos. “Beyond the historical significance for our country, the ceremony connects the ancient with the modern. “Ideals that were born in Ancient Greece travel around the world giving substance to the concept of culture and peace.”

The 2016 lighting ceremony will be witnessed by International Olympic Committee President Thomas Bach and Rio 2016 President Carlos Nuzman. When the runners leave the ancient stadium, they pause to pay homage at a monument to Baron Pierre de Coubertin, the French nobleman who was instrumental in reviving the Olympic Games in 1896. Runners will then take the flame to the neighbouring town of Pyrgos and it is set to arrive in Zakynthos in the early evening.

In this of all years, it is appropriate that it will cross the Rio Bridge which crosses the Gulf of Corinth. The flame first made the crossing in 2004, carried by Otto Rehhagel, coach to the Greek European Championship winning football team. It will then head north through mainland Greece before crossing the water to Corfu, the home island of Spiros Samaras, the musician who composed the Olympic anthem. Day three ends in Thessaloniki and it will then head on to Alexandropouli before returning south once again. The flame will also be carried by a Syrian refugee at the Eleonas Reception Centre in Athens, although the identity of the runner remains a secret. This is very symbolic and reaffirms the support of the Olympic movement for fellow citizens who have fled their homes under tragic circumstances and seek a better future for themselves and their families, according to Capralos. On the final day (April 27), the flame makes a short journey from the Acropolis to the Panathinaiko Stadium. There will then be a formal ceremony to entrust the flame to representatives of Rio 2016.

Sakis Rouvas, a Greek singer and one time athlete who was a star performer at the Athens 2004 Olympic Closing ceremony, will lead the entertainment in support of the Greek Olympic team as part of the “Hellas you can do it” campaign. Rouvas, who sang for his country at the Eurovision Song Contest, also presents the Greek version of singing contest The X-Factor. “I feel honour and gratitude to participate as a volunteer and and invite you, together with one voice, to send a strong global message from Athens to the world,” he said.  “A message of peace, fair play, noble competition, passion, optimism and pride.”