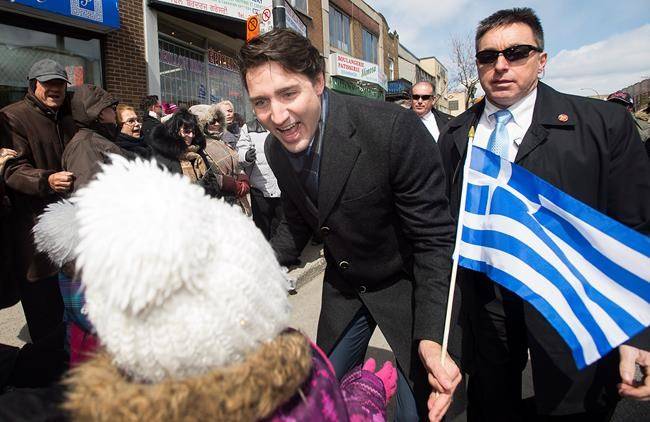 Trudeau quickly left the head of the procession to shake hands with members of the crowd lining the sidewalk.

He later waved a Greek flag from the sidelines.

The parade, which has been taking place in Montreal for about 40 years, featured brightly-dressed dancers and schoolchildren waving Greek, Quebec and Canadian flags.

One float paid tribute to the Greek island of Lesbos and featured children wearing life jackets worn by refugees.

A spokeswoman for the Prime Minister’s Office said Trudeau makes a point of attending the event every year since it takes place in his riding.

A day after Trudeau was mobbed by fans in a Halifax farmer’s market, he proved to be equally popular with an enthusiastic Montreal crowd.

John Kountourakis and Aglaia Panopalis ran through the crowds with their two young children to catch Trudeau, and the kids were rewarded with handshakes and high-fives.

“The fact that he came here as a Prime Minister when no other Prime Minister has come to the parade is fantastic,” Kountourakis said. “It says a lot about him.”

“It’s the Greeks that voted for him, when he became a deputy, and then he became Prime Minister,” he said. “So the Greek community is supporting him pretty well.”