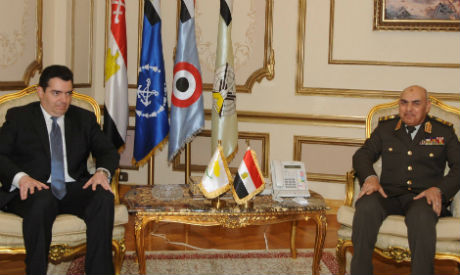 Sobhi and Fokaides, who is the first Cypriot defence minister to visit Egypt, also discussed previously signed memoranda of understanding for cooperation in defence, military trainings, and exchange of expertise, Brigadier General Mohamed Samir said in a statement.

Fokaides and Sobhi tackled “marine and energy security and prospects for cooperation in the energy sector,” according to a Cypriot press release, Cyprus News Agency (CNA) reported.

The press release stipulated that a Joint Rescue Coordination Center delegation will visit Egypt in the coming weeks to sign an agreement about cooperation in Search and Rescue.

Both defence ministers also discussed regional and international matters, including security challenges, the fight against terrorism, and the immigration crisis, according to CNA.

Sedki Sobhi expressed his appreciation for the depth of relations between Egypt and Cyprus, based on coordination and matching positions on regional matters for the security and stability of both countries, Egypt’s army spokesperson said.

Fokaides talked about Egypt’s regional importance and called for the support in its efforts in fighting regional terrorism, the Cypriot press release stated.