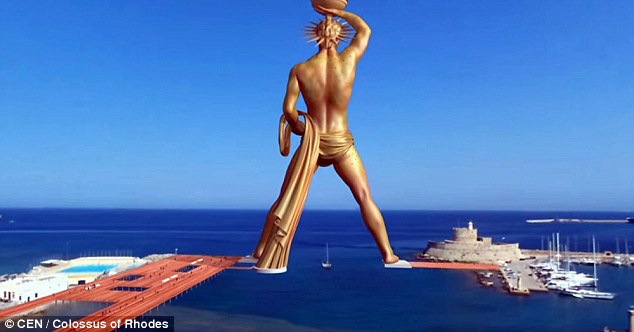 One of the seven wonders of the world, Colossus of Rhodes could be rebuilt under plans by a team of young scientists including several from the UK.

The Colossus of Rhodes was a statue of the Greek titan god of the sun Helios, raised at the mouth of the island’s harbour in the city of Rhodes, on the Greek island of the same, name 300 years before the birth of Christ.

The Colossus of Rhodes stood over 30-metres-high (98 feet), making it one of the tallest statues of the ancient world, but was eventually destroyed along with five other wonders including the Lighthouse of Alexandria, the Mausoleum at Halicarnassus, the Temple of Artemis, Hanging Gardens of Babylon, and the Statue of Zeus, with only the Great Pyramid of Giza surviving.

It had originally been raised as a subject in 2000, and although nothing initially came of the idea, it has now been given renewed vigour after it was revealed it would mean thousands of jobs, and probably millions of euros into the local economy when completed. And with all of Greece struggling under the current economic crisis, both would be well received.

The project by a team of young scientists from Greece, Spain, Italy and the UK, have now put forward detailed proposals to finally move things along and ‘rehabilitate an integral piece of the Greek island’s history,’ as they put it. The team includes architects, civil engineers, economists and archaeologists, who want to use 21st century technology while maintaining the grandeur the original statue had when it was completed in 280 BC.

Inside the statue that the team want to see built would be a museum, which would allow hundreds of items currently not on display in Greece because of a lack of space to be included inside. To fit it all inside, the project leaders want to create an even bigger statue than the original, with the plan being to build a 150-metre-high structure.

They also hope to include a library and a cultural centre, along with a light beacon that could be seen 34-miles-away, which would be not just a magnet for ships but also for tourists.

They have done a marketing study indicating that it would bring millions into the local economy when completed.

The structure takes into account the risk of earthquakes and winds, covering the surface of the statue of the man with photovoltaic panels that will ‘provide him 100 percent autonomy as the God of the Sun that feeds exclusively from solar power’.