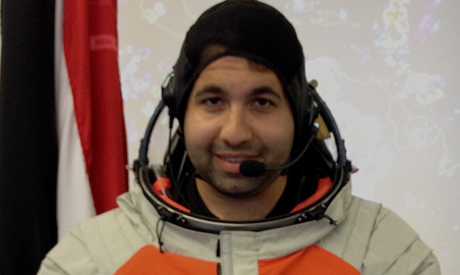 Akram Amin Abdullatif may fulfill his childhood dream of becoming the first Egyptian to travel to space, gaining inspiration from the catchphrase of his fictional childhood hero Buzz lightyear from the film Toy Story; “To infinity and beyond!”
Born in Cairo in 1988, Abdullatif was selected in June to compete in the Polar Suborbital Science in the Upper Mesosphere (PoSSUM) research-training programme, which is the first manned suborbital research effort devoted to the observation of the upper atmosphere.

PoSSUM is sponsored by the US National Aeronautics and Space Administration (NASA), and aims to study the mesosphere layer, take samples and undergo climate research at an altitude of about 100km from the Earth’s surface.

Abdullatif, who old was the only Arab among 12 candidates to be chosen for the for PoSSUM programme, told Ahram Online he felt “shocked” upon hearing the good news.

If the 27-year-old finsihes PoSSUM in high ranking, he stands a chance to travel on a space mission in 2017.

Starting in 2005, he studied communications engineering at the German University in Cairo for three-and-a-half years before finishing his bachelor’s degree at the University of Ulm in Germany.

He then received a master’s degree in communications engineering from the University of Stuttgart.

A fan of science fiction since his early childhood, Abdullatif decided just four years ago to follow his dream of becoming an astronaut. He studuied NASA’s handbook, finished a second master’s study in the field of space technology at the Technische Universität München (TUM), and joined Astronauts4Hire, a non-profit organisation which recruits and trains qualified scientists and engineers for the rigours of spaceflight.

He has been working for the past five years as an aerospace engineer at the German Aerospace Centre, and studies for a PhD in flight system safety at TUM.

Last year, he was encouraged  to apply for the PoSSUM programme following a discussion with NASA’s chief at a space event.

“I met NASA’s chief last year in a SpaceX launch where I was presenting on an Egyptian experiment carried out through the International Space Station (ISS). I talked to him a little, and he just told me that I must keep my dream up and that I will catch it, and then it was just done,” Abdullatif told Ahram Online in an online interview.

EGAHEP, the first Egyptian microgravity protein crystal growth mission on the ISS, aims to utilise the microgravity environment to crystallise the HCV genome 4 proteins that make up the Hepatitis C virus, seeking to understand the nature and behaviour of the virus and its process of replication.

Egyptians suffer from one of the world’s highest rates of Hepatitis C, with 15 million people – or 22 percent of the population – living with the virus.

In October of 2015, Abdullatif started a one-week advanced PoSSUM training at NASA facilities at Florida’s Embry Riddle University. He will undergo two more trainings in the US in 2016 before waiting for the big decision.

He told Ahram Online his Egyptian nationality was not a barrier in his career, saying he has not faced any discrimination.

“If you work hard and you compete with other colleagues, nationality won’t be considered a barrier in [general]. But in some cases, like working for NASA or the European Space Agency (ESA), nationality might be an issue because both organisations are federal and require local citizenship,” Abdullatif said.

His nationality may indeed affect his bid for space travel in 2017 as the selection process for candidates could be influenced by NASA rules.

NASA offers work opportunities to international astronauts only from countries that have signed space cooperation deals with the US agency, such as Canada, Japan, Russia, Brazil and some European countries.

NASA does not have any space agreements with the Egyptian government.

“I’m being pushed forward all the time by my role model, my father, who was a major general in the Egyptian Air Defence Forces; he passed away when I was 14.”

“While there are no guarantees that I’ll be chosen to fly, I’m still dedicated to reaching my goal,” Abdullatif says.