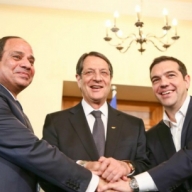 The Third Egyptian-Cypriot-Greek Summit will be held in Athens next month, a senior Cypriot official said. During a meeting with an Egyptian press team on Wednesday, 18/11/2015 Ambassador Leonidas Pantelides, the Director of the Middle East and North Africa Department, said the first summit was held in Cairo and the second in Nicosia.

He lauded the depth of Cypriot-Egyptian ties which he described as “excellent”, especially at the political and economic levels. Pantelides said Egypt and Cyprus are two “neighboring and friendly states.” Cyprus highly appreciates the role played by Egypt in the region, especially in backing the peace process. Pantelides added that without Egypt’s support for the Middle East peace process, there would be no Palestinian-Israeli negotiation. He noted that his country is coordinating efforts with Egypt concerning Middle East issues of mutual concern, underlining the importance of backing a political solution in Syria.

The ambassador said Cyprus backs the Egyptian authority under Abdel Fattah El Sisi. He noted that Cyprus works on encouraging more Egypt-EU dialogue. Pantelides underlined that the dialogue between the EU and Egypt is extremely important. He stressed that Egypt’s stability is very important, noting that all countries must have realized this in the aftermath of terror attacks worldwide. Pantelides noted that Egypt and Cyprus cooperate in the field of combating terror which became an international phenomenon. Meanwhile, he called for an Egyptian-Cypriot-Greek cooperation in the tourism domain, including organizing a tourist package for the three states.