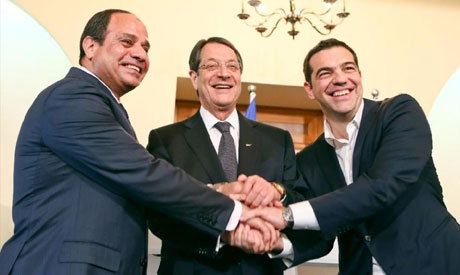 The presidents of Egypt, Cyprus and Greece will meet on 9 December in a tripartite summit in Athens to discuss steps to strengthen ties between the three countries, Cyprus government spokesman Nikos Christodoulides stated.

This is the third meeting between the three countries this year, with the two prior meetings taking place in Egypt and Cyprus and involving discussions on ways to combat terrorism, economic projects as well as the global refugee crisis.

Earlier this month, Egypt’s Defence Minister Sedky Sobhi visited Cyprus in an invitation by his Cypriot counterpart to discuss a number of strategic matters.