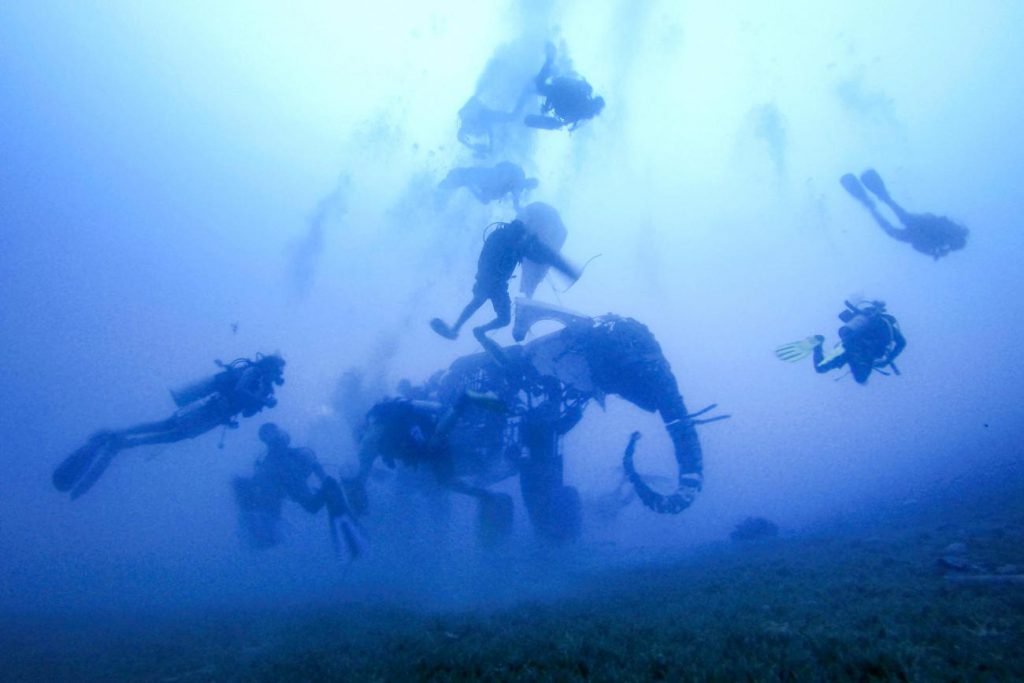 When the IDive Tribe started an underwater museum in Sinai’s Dahab four years ago, people thought they were insane. Now, the team of divers is planning their second museum in Hurghada.

February witnessed the latest addition to the museum: a statue to honor the Egyptian diver and holder of the world record of the deepest dive, Ahmed Gabr.

The new statue looks like the Oscar’s statue, which in turn resembles the Ancient Egyptian God Petah. The idea and the execution are of the artist and assistant lecturer at the University of Arts in Luxor, Hamed Mohamed. The statue is made up of 100 pieces of granite.

Aiming to help in conservation of the Red Sea coral reefs through decreasing the pressure on them by creating alternative dive sites, each statue is unique in its own way.

“The gallery consists of several artworks statues made by Egyptian hands and representing our culture,” said IDive founder Abdelrahman Elmekkawi.

Additionally, the museum serves as a new home for coral reefs. With rising global temperatures and the damage of human activity, coral reefs worldwide are in danger. The divers hope to “plant” the sea, with every centimeter needing at least ten years for growth.

The location of the museum is strategic, explains Elmekkawi. Scientists expect that in 70 years, most of the coral reefs all over the world will die,  except those inhibiting the Red Sea and the Arab Sea due to class C and D zooxanthellae temperature resistance (above 30 degrees). This makes the region a donor site for the regeneration all over the world seas

The first phase of the museum placed three statues – a donkey-shaped table and two chairs – at the Magra Al Seil area. A year later, an additional three statues were located near the lighthouse: statues of the Gods Horus and Bess, and a life-size elephant sculpture, weighing almost a ton, constructed from metal junk by Mohamed and a student of his.

The costs of the statues were raised from the group’s personal money, and 150 IDive members contributed volunteer work.

The next planned statue will be a ten meter pyramid, which divers can enter. Hamed plans to make drawings on one of the sides, while the artwork done on the other sides would involve international collaboration through inviting 50 art schools from around the world to take part of the project.

In addition to the Dahab underwater museum, the pyramid might start a new conservation and attraction sight in Hurghada.