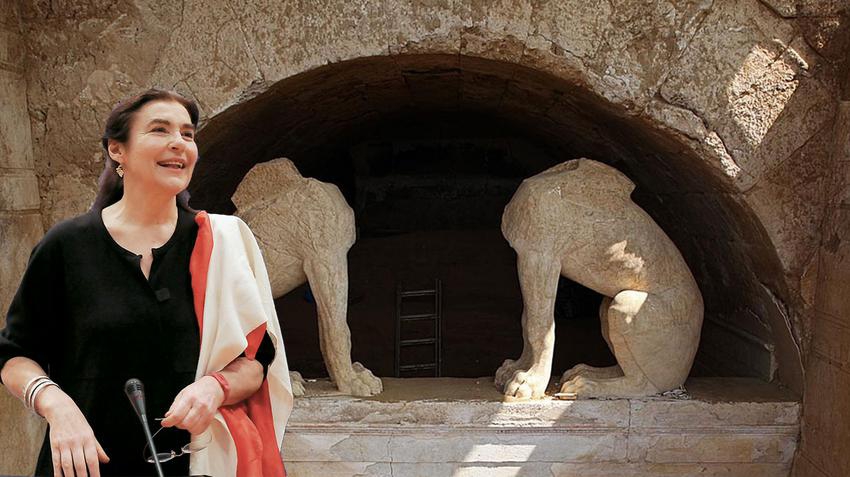 During a press conference this week, she clarified that the funds will be made available immediately for the restoration of the site in northeastern Greece, where a huge grave from Alexander the Great’s era was unearthed.

The so-called Kasta Tomb, also known as the Amphipolis Tomb is an ancient Macedonian tomb that was discovered inside the Kasta mound (or Tumulus) near Amphipolis, Central Macedonia, in northern Greece in 2012 and first entered in August 2014. The first excavations at the mound in 1964 led to exposure of the perimeter wall, and further excavations in the 1970s uncovered many other ancient remains.

The recently discovered tomb is dated to the last quarter of the 4th century B.C. The tumulus is the largest ever discovered in Greece and by comparison dwarfs that of Philip II of Macedon, father of Alexander the Great, in Vergina. The excavation team, based on findings unearthed at the site, argued that the tomb was a memorial dedicated to the close friend of Alexander the Great, Hephaestion.

It is not yet known who is buried in the tomb, but the initial public speculation that it could be the tomb of Alexander the Great, because of its size and estimated cost of construction, was dismissed by the experts community when commenting on the published findings, as the available historical records mention Alexandria in Egypt as the last known location of Alexander’s body; it has been supported instead, that a likely occupant could be either a wealthy Macedonian noble or a late member of the royal family.

The skeletal remains of five people were unearthed within a corresponding tomb, in the lower levels of the third chamber in November 2014. The dead of the burial are: A woman at the age of 60, two men aged 35–45, a newborn infant and a fifth person represented by minimum fragments. Further examination is underway with regard to the dating of the skeletal remains, as well as DNA cross examination between the dead of the burial as well as other skeletons from the neighboring tombs in the area.

At a press conference in the Aristotle University of Thessaloniki, Greek archaelogist Katerina Peristeri revealed the existence of three inscriptions apparently linking the tomb to Hephaestion, nobleman, General and close friend of Alexander the Great. The ancient Greek word “ΠΑΡΕΛΑΒΟΝ” (it means “received”) is written in the inscriptions and next to it the monogram of Hephaestion.

According to the Culture Minister, the resources will also be allocated for works to unify the archaeological sites of Amphipolis and create specially designed trails for visitors.

Ms. Koniordou  also revealed that other current projects of the Greek Culture Ministry include the upgrade of five more ancient Greek theaters, Ancient Gitana Thesprotia, Ancient Ambracia, Nikopolis, Kassopi and Dodona that are all connected through the Epirus cultural route.

Furthermore, the Culture Ministry plans to hire 1,314 museum and archaeological site guards for the season and they are expected to be in their positions as of early April.

Finally, she noted that the e-ticket access will initially run as a pilot program at the Acropolis, Mycenae, Knossos and Messina sites.