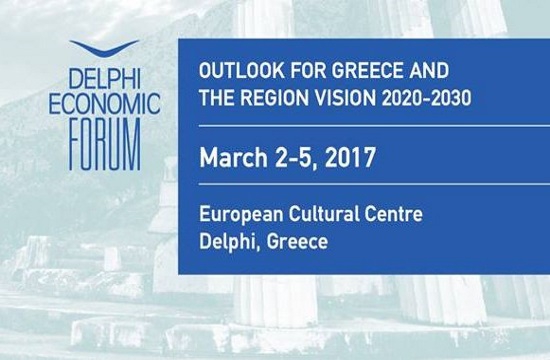 The speakers at the 2nd Delphi Economic Forum expressed reserved optimism over the possibility of a solution to the Cyprus issue even in the long term as well as over the energy reserves found in the eastern Mediterranean.

The panel on the ?new strategic equation in eastern Mediterranean? was held with the participation of Nadia Arbatova, head of the Institute of World Economy and International relations of Moscow, Ian Lesser, vice president of the German Marshall Fund of the United States of America, Theodoros Pangalos vice president of the Greek government in 2009-2012 and former Foreign Minister and Dr. Thanos Dokos general director of Hellenic Foundation for European and Foreign Policy ELIAMEP.

The speakers called the wider region of the Eastern Mediterranean and the Middle East as a difficult situation especially after the election of Donald Trump.

On her part, Arbatova referred to US-Russia relations after the election of Donald Trump and the volatile conditions in the Middle East stressing that Russian President Putin is trying to take advantage of the gap opened by the reduction of US commitments abroad and to reverse the view that Russia is a regional and not an international power. She also estimated that this was the reason for Russia’s involvement in Syria, return to an older status in which President Putin failed to succeed. On Turkey-Russia’s relations she said that they will never become strategic partners only occasional or ad hoc partners.