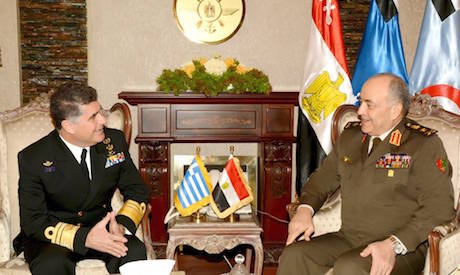 Egypt’s army Chief of Staff Mahmoud Hegazi met on Monday in Cairo with the Chief of Greece’s Navy General Staff Nikolaos Tsounis for talks over means of expanding joint military cooperation, a statement by the Egyptian Armed Forces read.

Egyptian army spokesman Tamer El-Rifaei said that the talks involved several issues of common interest, including an exchange of viewpoints towards developments taking place in the MENA region and their impact on the regional and international arenas.

Hejazi affirmed the depth of the ongoing partnership and cooperation between the Egyptian and Greek armed forces to support the efforts of security and stability in the Middle East.

During the training, Egyptian air and naval forces participated in the drills with Greek forces, which were held in the southeastern Aegean Sea and on the island of Crete.