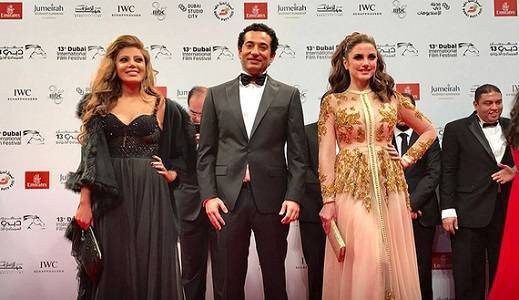 Egypt’s religious scholars are up in arms over a new film that takes on the nation’s sheikhs and mosque preachers.

The film, called “Mawlana” (“Preacher”), has been screened at cinemas nationwide since Jan. 4. It has stirred up controversy among Islamic scholars who accuse its makers of tarnishing their reputation and call for it to be pulled from theaters.

“Works that address religious texts should be reviewed by religious institutions before being made into films,”Shoukri el-Guindi, a member of the parliament’s Religious Affairs Committee, wrote on Facebook. “Inside these institutions, there are wise people who love their religion and their homeland, not ones who only follow their personal interests.”

Starring Amr Saad and Dorra Zarrouk, the film tells the story of a mosque imam who becomes a celebrity TV host who issues fatwas followed by millions of people. The imam receives questions from his viewers during the show and then answers them in an eloquent but sarcastic manner. He ridicules a number of the fatwas issued in real life by a large number of Egypt’s Salafist preachers, especially during the yearlong rule of Islamist President Mohammed Morsi.

The filmmakers say it tells the story of Egypt’s 120,000 mosque imams. The work is based on a novel written by Ibrahim Essa, a journalist and TV host who recently ran afoul of the government for his continual criticism. The novel, also called “Mawlana,” was shortlisted for the International Prize for Arabic Fiction, the “Arabic Booker,” in 2012.

The film is being screened at more than 60 movie theaters across Egypt. So far, it has taken in 6 million Egyptian pounds ($318,000).

However, some people say the film aims to strip reverence and respect from Islamic scholars.

“It is made with the sole aim of removing this reverence and respect from the scholars of Al-Azhar,” Mansour Mandour, a senior official from the Religious Endowments Ministry, which controls the nation’s mosques, wrote on Facebook. Nonetheless, Mandour added, the film shows how security agencies tried to control some sheikhs and used their vulnerabilities to force them to serve their interests during the reign of former President Hosni Mubarak.

The film coincides with calls for Al-Azhar and other Egyptian religious institutions to spearhead the reform of religious discourse, made in the past two years by President Abdel Fattah al-Sisi, who believes that the move will help his country fight religious extremism and terrorism.

“Renewing religious discourse must, however, preserve the values of true Islam, but also eliminate sectarianism and address extremism and militancy,” Sisi said in a 2015 speech at Al-Azhar.

A large number of nationally minded writers have joined him. Some of these writers tend to criticize Al-Azhar’s curricula, accusing it of nurturing extremism.

Essa is one of these writers. He believes that reform should not be the job of Al-Azhar alone, but of all Egyptians, including the intellectuals.

Essa is out of the TV business now after his show was banned. Some people say he paid dearly for speaking out.

“Mawlana,” he said, brings to light the contradictions in the mosque-preaching business.

The film’s director Magdi Ahmed Ali said most of those who criticized the film were motivated by their hatred of Essa, not by faults they found in the film. “I didn’t find any real criticism of the film,” Ali told Al-Monitor. “I only heard views critical of Essa himself and his views.” He said some people had criticized the film without even watching it.

The film, Ali said, sheds light on extremism and tries to show a lack of connection between it and the Islamic religion itself. He described this extremism as a “real danger” facing Egyptian society. “The film also shows that religion is sometimes misused by politicians,” Ali said. “Anyway, the people who watched the film understand its message.”

Ali, who also wrote its script, reported receiving phone calls from a large number of the nation’s well-known preachers to congratulate him on the film’s success.

Leading film critic Magda Khiralla praised “Mawlana,” saying it should be viewed as a work of art, not as a platform for issuing fatwas.

“The film only talks about moderate Islam through the character of a young yet open-minded sheikh who tries to shatter misconceptions about the Islamic religion through logical dialogue,” she told Al-Monitor. “Controversy over the film is expected only from those who view themselves as angels and persons without fault.”

(CENTRE for RELIGIOUS PLURALISM in the MIDDLE EAST)