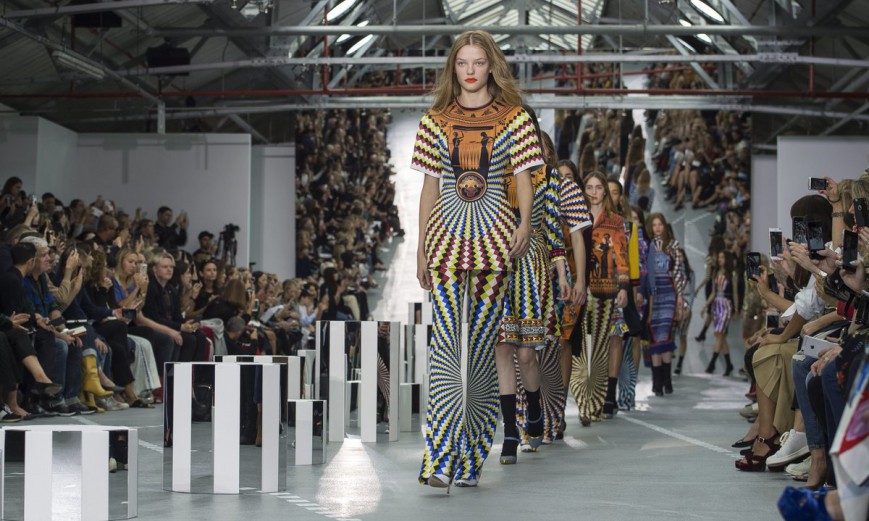 “It’s funny, I never wanted to use classical Greek art, because being from there, it seemed too obvious,” she said with a shrug after her show to a journalist from Vogue. “But this time, I thought, ‘Why not?’”

And with the “Why not?” acclaimed fashion designer Mary Katrantzou has presented one of her boldest ever collections featuring obvious hints of her Greek heritage and roots.

She recalled a childhood visit to the ancient palace of Knossos, on Crete, the center of the Minoan civilization, which was a matriarchal society.

This was one of Katrantzou’s angles, the profiles of Minoan priestesses or goddesses, which appear in Cretan murals and the silhouetted paintings on Greek vases and plates, which she transposed onto the bodices of dresses, and, in a couple of cases, printed onto shimmery chain-mail tunics.

Katrantzou said she was also triggered by the words of a girlfriend who happened to remark, “Your work is so psychedelic!” She’d not seen her many-layered digital compositions that way before, but it led her to search out the trippy graphics of late-’60s and early-’70s music posters. So it went: Swirly prog-rock patterns met the symbols of the ancient Greek world in flared trousers and stretch T-shirts, layered under lots of the embellished dresses that have become Katrantzou’s signature.

Kantrantzou is one of Greece’s most successful exports in the field of fashion. Now London based, the designer’s clothes have adorned some of pop culture’s biggest celebrities. Rihanna counts as one of her biggest fans as do Sara Jessica Parker and Angie Harmon.