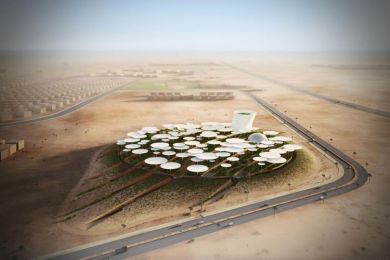 Weston Williamson + Partners, a design firm from the United Kingdom under the direction of Philip Turner, has been awarded First Place in the recently concluded single phase, open, international competition for a “Master Plan and Conceptual Design of the Science City,” to be located in 6th of October City near Cairo.

The competition was launched on 15 April 2016 to find the comprehensive plan and design for a complex dedicated to science and to research.  The configuration of spaces is intended to be both a landmark for the 6th of October City and a symbol of the rebirth of the study of science in Egypt.

The Jury unanimously selected the winning project out of 145 entries from 45 countries on the basis of its “subtle but rich design,” using “a multitude of umbrella-like, circular canopies of various sizes, supported by single columns, providing a symbolic, ‘column-scape’ and an upper terrace elegantly shadowed by artificial clouds,” which also provide “opportunities for water harvesting and solar energy collection.”  The project can be completed in three stages, starting from the central section and growing as wings, thus furnishing a “rational and workable” design solution.

Honourable Mentions were awarded to

The UIA endorsed this competition and was represented on the jury by Greek architect and UIA Council Member Nikos Fintikakis.