Planning a trip to Athens? Just use your phone and start booking! 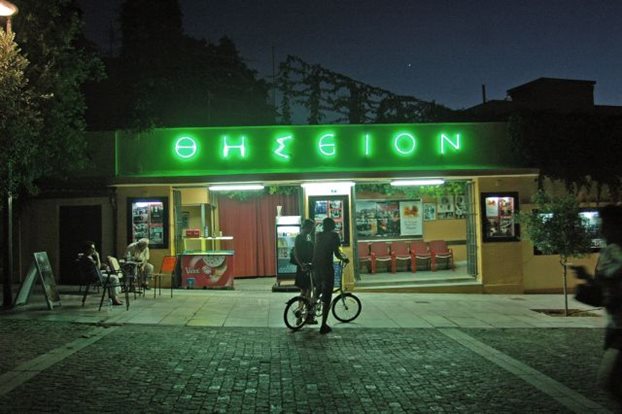 Whether you are in the Greek capital this summer or enjoying your vacation in the countryside, there is a longstanding summer tradition all over the country to spend the evenings at an outdoor cinema, while having a drink under the stars, with a soft summer breeze and the scent of bougainvillea and jasmine filling the air. Athenian summer cinemas bring back unforgettable memories of summer nights surrounded by potted plants, gravel under the feet of the audience and water fountains. Occasionally a cat strolls in front of the movie screen and songs from loud speakers are filling the gaps during the intermission. This unbelievable atmosphere is combined with the freedom of outdoor smoking, the waning moon, the illuminated windows of the surrounding houses and youngsters who watch free of charge from their balconies.

The first summer cinema opened in Greece in the early 1900s. The tradition became popular all over the country and especially in Athens before the war when silent movies became talkies, one of the most affordable means of entertainment. Then, during the heyday of Greek tourism in the 1960-1970s, there were as many as 700 open-air theaters in Greece (600 of them in Athens), that is five times more than today. This reduction is mainly due to the challenges posed by the digital age in combination with the current financial crisis.

Fortunately, some open- air theaters persist and survive, keeping the magic alive. In Athens, there are many open air cinemas all over the city, including in the middle of heavily built up areas, on rooftops and in enclosed courtyards. Athenians are, thus, spoilt for choice when it comes to summer cinemas with at least one at every neighborhood. Around 15 are located in Athens downtown welcoming cinephiles who want to watch the reruns of movies from the winter or classical movies that appeal more to the wider public.

Specifically, one of the oldest open-air cinemas in Athens, located in the Thisseion area, is ZefyrosOutdoor Cinema, with its two red velvet curtains at the entrance symbolizing an unashamedly unmodernized reverence for cinematic tradition. Close by, in Plaka area, one can find Cine Paris which is operating since the 1920s and Cine- Thisseion which is offering the best direct view to the Acropolis and has been ranked by CNN among the top movie theaters in the world. A little further up, just few steps from Syntagma Square, Cine Aegli in Zappeion provides the perfect setting for a cinema night, perfectly combined with a stroll through the beautiful Zappeion garden and a drink at the luxury Aegli Bar. In close proximity, located on Dexamenis Square in Kolonaki, you can find one of the oldest cinemas in Athens Dexameni just up the hill.

For something more alternative, one can visit Riviera cinema, situated in a scented garden in the Exarheianeighborhood or the legendary rooftop cinema VOX, frequented by local actors and artists– famous for its love of the Hitchcock oeuvre and for showing European and arty films true to the intellectual character of the district. Other charming options include Cine Psiri, situated in the quarter of Psiri -one of the most artistic areas of Athens- and the open-air cinema operating on the roof of the Greek Film Archives premises at Lais, Kerameikos, a new culturally growing neighbourhood in Athens. It’s also worth mentioning Cine Palas, one of the oldest cinemas in the district of Pangrati, complete with art-deco interior and red velvet armchairs, as well as a second, open-air venue on the rooftop, notable for quality movies and a ticket option which allows you to watch three movies for an unlimited period of time.

Last but not least, cinephiles who want to enjoy their favorite movies under the clear starry skies of a Greek island, no problem! There are many islands in Greece that offer movie magic under starry nights. Among them is the party island of Mykonos with its famous Cine Manto which has been rated by the British newspaper “The Independent” as one of the best open-air cinemas in the world. Another famous island is Santorini with Cine Kamari, a charming venue that was created in 1987 to host various cultural events, including concerts, art exhibitions and theater plays.