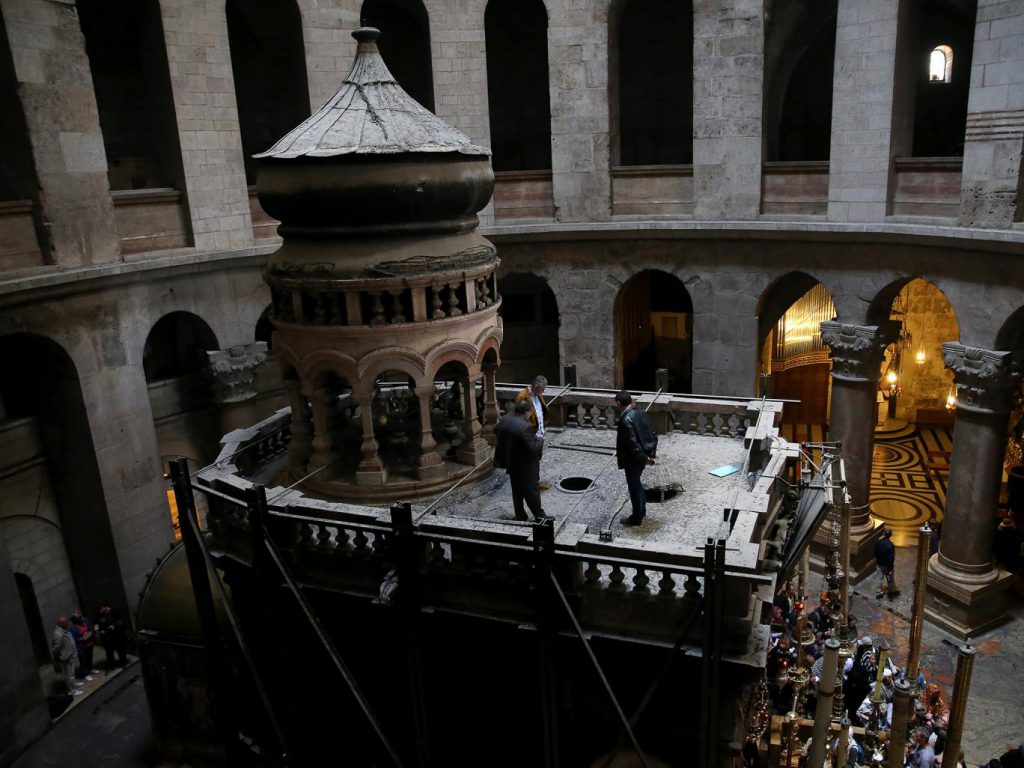 Longstanding religious rivalries have been put to one side as a team of experts begin work on restoring the church where Christians believe Jesus was buried.

Roman Catholic, Greek Orthodox and Armenian churches are responsible for maintaining separate sections of Jerusalem’s Church of the Holy Sepulchre, with each protectively watching over their territory.

Although those who work and pray at the church usually do so in harmony, tensions have been known to rise in the past. In 2008 an argument between Greek Orthodox and Armenian monks resulted in a brawl.

However, the clergymen have now put aside their differences as the building is in dire need of repair. Last year, the Israeli police even shut down the building for a brief time after Israel’s Antiquities Authority declared it unsafe.

“We equally decided the required renovation was necessary to be done, so we agreed upon it,” said Reverend Samuel Aghoyan, the top Armenian official at the church.

Each denomination will contribute to the $3.3 million (£2.26 million) needed to fund the project, and Jordan’s King Abdullah will also make a personal donation.

Nine Greek experts, who have previously worked on the Acropolis and many Byzantine churches, have been enlisted for the task, which will reinforce and preserve the Edicule – the ancient chamber where the tomb is held.

Pilgrims and tourists will still be able to visit the site while the work – which is expected to take around a year – is undertaken.

Antonia Moropoulou, an architect at the National Technical University of Athens, which is supervising the renovation, said: “Nobody envies this responsibility and challenge. It is a challenge to work here in this ambient of an open monument visited by thousands of people daily.”

She said although the tomb is stable it requires urgent attention after years of exposure to environmental factors like water, humidity and candle smoke.

“The marble and stone slabs have developed, due to the stresses, some deformations,” she said, while “another solution is needed” for the iron cage around the Edicule, which can no longer withstand the stress.

The church is one of the world’s oldest – and holiest –shrines. It was built in 325 AD by Roman Emperor Constantine just meters from where Jesus is believed to have been crucified.

This structure was destroyed by Muslim Caliph al-Hakim in 1009, however it was restored in the 12th century by Crusaders.

In 1808 the Edicule was devastated in a fire, and the work to repair the damage in 1810 was the last undertaken at the Holy site.

Italian pilgrim Claudio Pardini said the restoration is “an important sign”, and shows all of the Christian churches are working together to preserve their faith’s traditions.

“It’s good to take care of our churches so that we can leave the next generations a sign, something to visit, because Christ isn’t an idea. He’s a story,” he said.