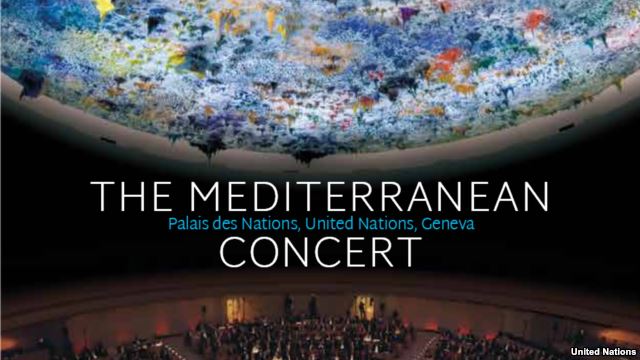 Fifteen artists from 12 Mediterranean countries kicked off the first in a series of annual concerts Saturday at the United Nations in Geneva intended to promote dialogue and understanding among civilizations.

Organizers of The Mediterranean Concert take the significance behind catch phrases such as “music speaks louder than words” or “music soothes the savage breast” seriously.

Miquel Angel Moratinos is president of the ONUART Foundation, a private organization that promotes cultural projects at international institutions in Geneva.  He said ONUART decided to gather artists from Mediterranean countries so “we could have a clear message to this very moving and turbulent area at this time.”

He said the 15 artists, who come from different origins and musical styles, are able to convey through their music the message that the troubled Mediterranean region has been and always will be a flourishing civilization despite present and past conflicts.

“I hope that this concert will give the sense of the need of having the voice of the people in the Mediterranean to stress that peace is possible, harmony is possible, tolerance is possible in this important area of international community,” he said.

The concert took place in the Human Rights and Alliance of Civilizations Chamber, a large conference room where the U.N. Human Rights Council meets.  The venue is filled with symbolism.

The message was not lost on Nassir Abdulazia al-Nasser of the United Nations Alliance of Civilization, who is co-organizer of the concert.

“Today, the conflict in the Middle East is very dangerous, which affects the peace and security not only in the region, but outside,” he said.  “The message of music is a message of peace.”

Syria is into its sixth year of war.  The devastating conflict has killed an estimated 400,000 people and has displaced more than 11 million, both within the country and as refugees.  The war also has triggered the biggest migration crisis in Europe since World War II, as millions of refugees and migrants have crossed the Mediterranean Sea in the pursuit of refuge.

Two other wars, in Iraq and Yemen, continue unabated, with reports of large-scale killings, mass displacement, human rights atrocities and devastation of infrastructure.

Al-Nasser said it is up to politicians, not to artists, to resolve the crises, but he is convinced that art is “a vehicle for the promotion of peaceful dialogue between cultures and societies.

“All forms of art and especially music,” he said, “can build bridges between people who cannot understand each other’s languages, who come from different religious and ethnic backgrounds.”

Spanish singer Maria del Mar Bonet said music, for her, was a way of moving toward dialogue and peace.  She told VOA that the Mediterranean is “a place in turmoil, a place of suffering,” and that this must end.

“The fact that each artist selects a work and performs it sends a powerful message that we do not want to suffer anymore,” she said.  “We do have to end the suffering, and by coming together as we are doing in this concert, we are taking a great step toward that end.”

Organizers of The Mediterranean Concert want to spread their musical message of peace as widely as possible.  They said they have plans to replicate the concert in other historical Mediterranean sites, such as the Pyramids in Egypt; Carthage in Tunisia; Baalbek in Lebanon; and Jerash in Jordan.