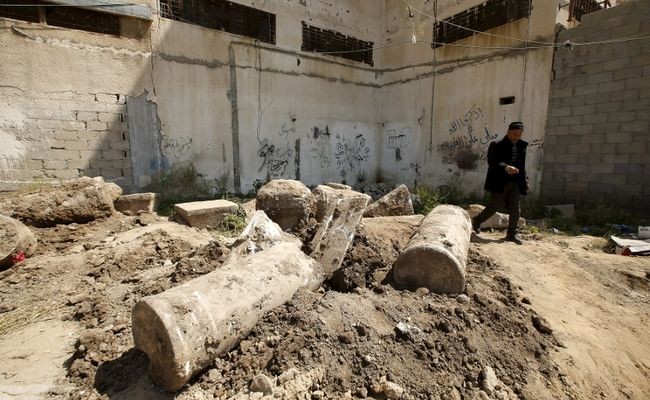 The findings include segments of marble pillars with ornate Corinthian capitals and a foundation stone bearing a Greek symbol for Christ.

During the works to build a shopping center in Gaza, Palestine, a group of construction workers discovered ancient ruins that archaeologists believe they are parts of a Byzantine church sating from around 1,500 years ago, the Palestinian tourism and antiquities ministry said on April 4.

The findings include segments of marble pillars with ornate Corinthian capitals, one nearly three meters long, and a 90 cm foundation stone bearing a Greek symbol for Christ. Fifteen pieces have been uncovered, with excavations continuing, as Hurriyet Daily News reports.

“Our first thought is that the site is a cathedral or a church from the Byzantine period,” said Jamal Abu Rida, the general director of the antiquities ministry.

“During that era, there was a great interest among the Byzantine rulers to build churches in the Gaza Strip.”

Gaza was a prosperous seaport during the Roman period, with a diverse population of Greeks, Romans, Jews, Egyptians and Persians. Pagan temples were destroyed in the late 4th and early 5th centuries and there was widespread church-building.