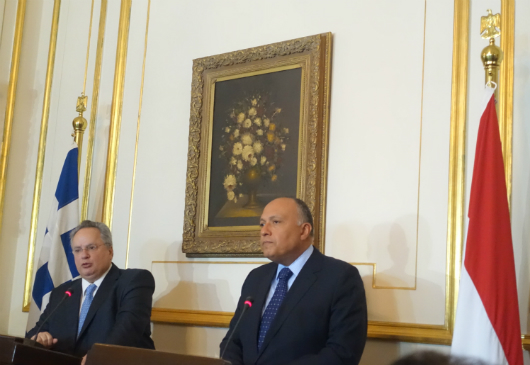 Greece and Egypt enjoy a great and long common history and cooperation. The political ties that have been developed over time have contributed to the forging of excellent relations of historical importance.

Over the past 18 months, there has been intensive cooperation between Greece and Egypt, with exchanges of high-level visits. There were many meetings with the Foreign Minister of Greece in international organizations, and there is an ongoing dialogue for finding solutions and promoting the two countries’ common interests.

Of course, there is also the trilateral cooperation between Greece, Egypt and Cyprus. There is also communication on the political level for the resolution and handling of all the challenges and problems, whether in the Mediterranean region or, more generally, in the wider Middle East region.

In our meeting today, we looked at various issues, including the strengthening of bilateral cooperation, mainly in the economic sector. We also explored issues of common interest. There is a common line and agreement with regard to the way to confront the challenges, particularly in sectors bearing on security.

Once again, I thank the Greek Foreign Minister, and I would like to thank all of the members of the Greek government, which truly supported Egypt at a very difficult time, following the revolution of 25 January 2011.

Greece succeeded in conveying to its European partners the real state of affairs that existed in Egypt, and not what other countries’ wanted to propagate. It was an important task that the Greek political leadership carried out in order to convey the reality of the situation prevailing in Egypt.

Finally, Egypt managed to complete the political roadmap it set out at the beginning of President Sisi’s term in office, including the holding of presidential and parliamentary elections. It is a plan that has been completed.

I thank Greece for standing at Egypt’s side, and we look forward to expanding our cooperation in the near future.

N. KOTZIAS: I thank you for the invitation, the hospitality, and for the substantial and constructive talks we had; talks we will continue during the luncheon.

Egypt and Greece are two countries with great civilizations that met many times over the course of history. For us, Egypt is the heart of the whole Arab world. This city was the birthplace of great representatives of Arab culture, of song, of cinema. We are not linked only by geostrategic and economic interest, but also by our history and culture.

We defended the rights of Egypt in all the international fora, because this is dictated by the interests of the European Union itself.

The rise of jihadism and terrorism is a common foe. We see as positive, and recognize, Egypt’s role in the political solution of the Libyan problem. We are together in the effort to bring peace to Syria. Syria is the source of the major problem of the refugee influxes that are testing the European Union itself, and not just my country.

My friend the Egyptian Foreign Minister and I discussed the further development of cooperation within this trilateral format. Today, this evening, I am going to Cyprus, and I will convey the positive messages there.

But we also had an excellent conversation about the proposals for developing a more general system of security and stability in the Mediterranean. Egypt and Greece, because they are good and strategic friends, will take initiatives in this direction.

We are very pleased at the project carried out in Suez. We are also very pleased with the new cooperation between the two countries in the sectors of ports, investments and trade.

We are continuing to discuss energy cooperation, following the wonderful discovery in Egypt, the Zohr deposit.

We are pleased at the way the Egyptian government defended the rights of Christians; rights that were in great jeopardy a few years ago.

We thank Egypt for its contribution to peace and stability in the region, for protecting all religious and social groups, and for this very warm welcome today.

JOURNALIST: Talk to us about the talks on the situation in Syria, as well as about Turkey’s involvement in and stance on developments in the Arab world.

S. SHOUKRY: As you know, the situation in Syria is truly brutal. The country is facing death on a daily basis. As we have observed from the constant efforts to resolve the situation, the military mediation of third countries is not accepted in Syria. That is why we believe that the only path to resolution of the Syrian crisis is political dialogue and the finding of solutions that are acceptable to all of the factions in the country. The International Support Group for Syria has taken many positive steps in the direction of resolving the crisis. On the other hand, the Arab world, and the Arab League in particular, refuses any military intervention in Syria by countries outside the region. Of course, we criticized the fact that Turkey is carrying out strikes in Iraq and Syria.

JOURNALIST: The largest influx of migrants into Greece is coming from Turkey. Is Turkey exerting pressure on Greece to accept the migrants?

N. KOTZIAS: First of all, the refugees in Greece resulted from wars in which we did not participate. That is, we are paying for the wars of others, many of who are wagging their finger at us. Moreover, the refugee flows arose because of an absence of necessary funding for the camps in Jordan and Lebanon. Just as we insisted in the EU on revising the 2013 conclusions on Egypt, which is making an important transition, we also insisted on the need for a European political strategy for Jordan and Lebanon. The European Union started to discuss these issues after a year’s delay.

The third cause of the refugee issue in Greece is that a number of countries are not implementing the decisions on readmission of migrants; when, that is, they return from Greece to Turkey, from the EU to Pakistan, and so on. You will have seen that for two weeks we discussed in NATO the implementation of a decision that could be implemented very easily. One of the causes of this is the difference between the military and the politicians in Turkey itself. Moreover, the clashes within Turkey have caused a new current of displaced Kurds. So we have various causes that are creating a flow, which passes through Turkey.

Turkey, too, is suffering from these refugee flows – and it is paying the cost of these flows. However, there are those who are doing business in Turkey through the refugee crisis. There are illegal networks – including a portion of the mechanism for stopping this phenomenon – trafficking in refugees and “playing” with this issue. The European Union made an agreement with Turkey, and that agreement has to be implemented. But the non-implementation of the agreement is the fault of certain European states that tend to exercise foreign policy in our region using 19th-century methods.

The refugee issue is a complex problem that requires complex solutions, but its current core has to do with a rational, democratic, political solution in Syria.

JOURNALIST: Regarding cooperation in the Eastern Mediterranean, cooperation on delimitation of the EEZ is also foreseen. How is that process moving forward?

S. SHOUKRY: There is certainly interest in activating the cooperation with Greece in various sectors: economic, political, cultural – as well as in the security sector. We are working to shape this relationship through achieving frameworks that will bring benefits for both countries. We are interested in the development of cooperation in the maritime sector and natural gas, as well as within the framework of the trilateral cooperation between Greece, Cyprus and Egypt. All of these are being formulated in accordance with the technical and economic factors that determine this issue.

JOURNALIST: What is the method, and what actions will the government take in the coming days, for there to be an agreement with NATO, which is the only hope for preventing the refugee flows?

N. KOTZIAS: With regard to NATO, first of all you know that I don’t usually comment when we are in the midst of negotiations. Turkey was initially interested in an agreement based on which NATO would shift towards Syria. We have no such interest. The second point is that NATO will help with monitoring and limiting the flows in the territorial waters between the islands of the eastern Aegean and the Turkish coast. I see that, in the negotiations on the plan for implementing this decision, there are different opinions on individual issues for which solutions can and must be found. We are making a positive contribution. What cannot happen is for any request or negotiation to move ahead outside the framework initially set. That is why today, in today’s negotiations, we made it clear to all sides. It turned out, in the end, that it is others who are worried about what was initially agreed upon.