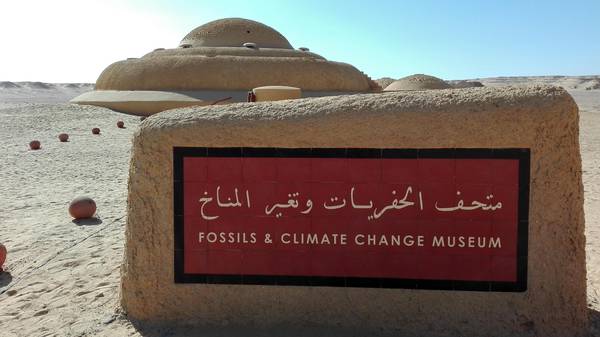 WADI EL HITAN (EGYPT) – The “Fossils and climate change museum” was inaugurated in the Egyptian desert and presented as the only one of its kind in the Middle East and probably anywhere the world.
Financed by Italian Cooperation, it was built in the area of Wadi El Hitan, the ”valley of whales” that extends in the governatorate of Fayoum, one of the most significant fossil sites on the planet.
The remains of the biggest “Basilosaurus isis” ever found, a prehistoric whale which could reach up to 20 mt in lenght, are exhibited at the centre of the museum. A path of 11 ”stations” with explanation panels illustrating other whale fossils dating back to over 40 million years ago, runs all around it.
The Egyptian site is a Unesco Heritage Site since 2005, also thanks to Italian Cooperation.
“The museum is the first of its kind in the Middle East” said a UNDP report.
The UN Programme for Development followed the construction of the museum financed by Italy with approximately 500 million dollars.
On the sidelines of the inauguration sources told ANSAmed that “being in the middle of the desert” (approximately 200 km south of Cairo) and ”facing the effects of climate change”, the museum ”is the first one of its kind in the world”.
The structure built with the circular profile of a dune with traditional materials fades away in the landscape like the dunes of the Egyptian ”western desert”, a low canyon.
Inside, the skeletons of two Basilosaurus emerge.
The bones form a double circle, around it panels and fossils illustrating other whales, prehistoric sharks, crabs and petrified mangroves, millions of years old corals.
The complex is enriched by a series of structures which facilitate the reception of visitors: an information centre, a ticket office, a cafeteria, a tourist police office, a parking and toilets all built by Italian Cooperation during the course of the last few years.
“We put the wall underground and the dome on top” architect Gabriel Mikhail, who built the construction “imitating the surroundings and ensuring a better temperature inside” told journalists. You come here to follow “a journey that begins with earth’s creation” through several eras, summarised Mikhail adding that this desert once hosted “a tropical forest” and ”before then” the area ”was beneath the sea”.
The museum educates visitors about ”the importance of natural heritage” and its message is ”protect it: pay attention to climate change; if you don’t do so, you shall be extinguished” just like the prehistoric whales.
You reach the site after three hours by bus bypassing two prodigious lakes opening up onto the desert and 35 km of a hypnotic dirt road.
As a consequence of the terrorist threat, security was guaranteed by dozens of armed policemen and two armoured vehicles.