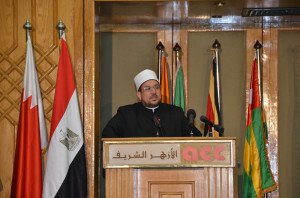 Egyptian Minister of Religious Endowments Mohamed Mokhtar Gomaa lauded Wednesday the Greek parliament’s recognition of the state of Palestine, describing it as a “positive move”.

Gomaa called on nations to recognise Palestine and its right to establish an independent state based on the 1967 borders, according to a statement released by the ministry.

Al-Azhar also welcomed the Greek parliament’s recognition of the state of Palestine, urging more countries to follow in suit. Praising its successful diplomacy, Al-Azhar lauded the Palestinian efforts to achieve their full rights and territories.

The Greek parliament approved its recognition of the state of Palestine Tuesday and urged the Greek government to “take suitable measure to recognise Palestine and encourage diplomatic efforts to continue peace talks in the region”.

Tsipras lauded the decision, describing it as “special” because the parliament voted unanimously on it.

Palestine’s Fatah movement welcomed the recognition and said the relations between Palestine and Greece have “developed” over years. Fatah agreed that other countries should follow Greece in this move.