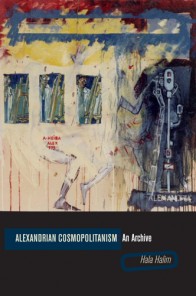 [This review was originally published in the most recent issue of Arab Studies Journal.]

Hala Halim’s book is a provocative and erudite study of the modern European literary discourses that have constructed Alexandria as the exemplary site of what we might call cosmopolitan desire. Following Edward Said’s critique of orientalism’s endless discursive recycling of itself, Halim reads these Alexandria representations as an archive of a specialized Eurocentric discourse based in canonical texts characterized by “citation” and “self-referentiality.” The book marshals a rich range of conceptual and historical discussions, and an array of critical and archival resources, to make a broad and illuminating argument about place and the politics of representation.

Halim discusses the core of this canon—what she calls “the literary triumvirate” of Constantine Cavafy, E. M. Forster, and Lawrence Durrell—in three separate chapters. Through close readings she traces the pattern and substance of the archive of literary, historical, and critical texts that produced and sustained “Alexandrianism” over the course of the century that witnessed the end of high colonialism and the emergence of a liberationist postcolonial order in Egypt.

Halim’s central contention is that Alexandrianism—as distinct from the literary texts it celebrates and canonizes—is a type of nostalgic neocolonial discourse that seeks to detach the city from its national and regional geography and histories and recuperate it. In one version, this revived narrative helps uphold the fantasy of a lost “golden age” of European hegemony, and in another version, it serves to valorize a properly postcolonial aesthetic of transnationalism and hybridity. Her claim is that both versions of this discourse are invested in a politics of representation built on a series of textual, historical, and geographical erasures. The book is in part an attempt to map the ghosts of these erasures in the work of, and in the critical scholarship on, the “triumvirate” and to trace the outlines of what a fully territorialized Alexandria might look like in the contemporary Egyptian imagination.

The introduction lays out this claim by tracing the genealogy of the concept of cosmopolitanism, with its “imperial pedigree of universalism,” and exploring the tension between postcolonial celebrations of cosmopolitanism’s globalized, transnational subject (exile, refugee, and migrant) and its unspoken other. Taking her cue from a special issue of the journal Public Culture in which this other is named as nationalism—“an increasingly ‘retrograde ideology’ producing ‘horrendous conflicts in recent history’”—Halim suggests that “not all lives are transnational.” Lived post/colonial subject positions occupy a much broader and more nuanced range of relationships to territory (the traveler, the sojourner, the habitant, the indigene), she says. The possibility of radical agency is thus at least partly rooted in national and international (as opposed to “cosmopolitan” or “transnational”) spaces, as witnessed in 2011 by the people in Tahrir Square in Cairo, which became a space of inter/national imaginations and solidarities. Here lies one of the most important and productive threads in the book’s deconstruction of the archive of Alexandrianism: the implicit insistence on the importance of habitation (and the attendant notion of lived place) as the taking-off point for non-Eurocentric and egalitarian forms of conviviality, creativity, and action.

Halim’s nuanced readings of the Cavafy/Forster/Durrell triumvirate is intended as a critique of the role of specialist literary criticism, which “reiterates and orchestrates, with additional contributions of its own, the quasi-colonial historiographical narrative of Alexandria’s cosmopolitanism.” She convincingly argues that this metacritical narrative is built on a kind of willful misreading of the canonical texts, a misreading that functions by “overlooking certain texts, occluding resistances in others, and disregarding genre expectations in given instances.” She then supports this claim by picking apart the critical-discursive apparatus that binds the triumvirate into a harmonious canon, and by foregrounding the erasures and dissonances—what I would call the poetics of ambivalence—that haunt the work of the three writers.

Exploring the “Greek” versus “barbarian” trope in C. P. Cavafy’s noncanonical poems, Halim identifies this binary as a scholarly-critical construction that misses the ways in which Cavafy’s neo-Hellenic positions and poetic personas are permeable, fluctuating, and rooted in a transculturated writing practice. This practice, she argues, recognizes “emphatically hyphenated” identities and textualities as well as “the cultural vicissitudes that history and religious difference have effected in the space of Alexandria.” Despite the traces of orientalism, the othering of Islam, and the westward gaze of much of Cavafy’s work, Halim makes visible the horizontal poetics of habitation that shape his connection to the city in which he spent most of his life. Unlike Forster, a colonial administrator and a liberal supporter of the British Empire, or Durrell, who traveled as a press attaché for the British Foreign Office, Cavafy occupied a position that allowed him to recognize and absorb the city’s multiple histories and geographic orientations in unexpected and changing ways.

This reconstituted Cavafy is then always present at the margins of the next two chapters, “Of Hellenized Cosmopolitanism and Colonial Subalterity” and “Uncanny Hybridity into Neocolonialism,” which take up the task of deconstructing Forster and Durrell’s place in the canon. Halim shows how Forster’s Alexandrianism was constituted by nineteenth-century imperial historiography: the narrative of decline and fall epitomized in the work of Edward Gibbon, for example, whom Forster much admired. But the narratives sustaining this historical paradigm are built on the erasure of material histories, geographies, and lives. By framing her fascinating discussion of Alexandria: A History and Guide around narratological questions of genre and emplotment, Halim shows how the tension between colonial ambivalence and Alexandrianism in Forster’s writing produced a haunted textual and material landscape that Forster himself was never quite able to exorcise. In the Guide, vanished archeological sites become embodied markers on the map of the real city, which in turn recedes into a spectral invisibility (Forster was completely uninterested in “the native quarters”). But the ghost of the indigene (the subaltern in Halim’s naming) forcefully emerges through the cracks in the author’s discursive mappings of the city. Halim carefully follows the traces of Forster’s Egyptian lover and protégée—a tram conductor named Muhammad al-‘Adl who died at an early age of tuberculosis—in his recently published memoir and letters. The story Halim tells of Forster’s class- and race-inflected ambivalence toward the young man, of his destruction of over a hundred letters of their correspondence, and his composition, over seven years, of a posthumous letter to him in a gesture of “impossible empathy” is deeply moving. The ghost of al-‘Adl in Forster’s writing on Alexandria simultaneously points to the tragic limits of the imperial subject and powerfully asserts the presence of the indigene as a persistent challenge to the colonial imagination.

Turning to Lawrence Durrell’s Alexandria Quartet, Halim discusses what she characterizes as a neocolonial moment in the discourse of Alexandrianism. Reading against “critical studies that astonishingly reclaim [it] as a post-colonial text, or one that instantiates the beginning of such a turn,” Halim argues that Durrell “can be interpreted as scripting, in a valorizing vein, the role that a local cosmopolitan elite can play in neocolonial interventions.” Linking Freud’s concept of the uncanny to the aesthetics of primitivism and orientalism in European modernism, Halim reads the Quartet as “an ‘uncanny’ space of ‘colonial hybridity.’” Neither Europe nor Africa but something utterly lost in between, Alexandria, in Durrell’s words, is “the city of despair, and incest.” Halim argues that the construction of “Levantinism” in the Quartet stands in for the Alexandrian “mimic man,” here represented by Mountolive’s Nessim, who is not quite European and whose figuration masks “a fear of the return to a repressed Africa.” This racist paranoia is then mirrored by social and imperial panics, where the “Egyptianization” of the economy under Nasser and the post-Suez order mark a return of the barbarian other.

Nessim, a wealthy Alexandrian Copt, and his Jewish wife Justine conspire against their British colonial friends to arm the Zionists in Palestine. Driven by rage at “fanaticism” in Egypt, Nessim hopes for a future Coptic-Jewish alliance against “the rising tide of Arab nationalism.” Halim notes the historically farfetched quality of this plot and its normalization of Israel, and further unpacks the way the narrative creates ideologically driven maps of identity and filiation. Upon discovery of the plot, Nessim flies off to Switzerland with Justine to execute “something much bigger this time, international.” Into the menace of this ending, Halim reads the figure of the cosmopolitan, transnational subject as a formidable producer of neocolonial futures, “of distant interventions enabled by free-floating subjects…insulated from the responsibility of their actions.”

If modernism is complicit in the reconstruction of the imperial imagination of Alexandrianism, so is the postmodern aesthetic, which recycles the same archive in an ironic and parodic mode. Examining the mostly unpublished libretti (1940s–1990s) of the self-identifying “Levantine” Alexandrian Bernard de Zogheb in the fourth chapter, Halim concludes that although de Zogheb’s project of “queering Levantinism” in the name of a postmodern anti-essentialism certainly mounts a challenge to the forms of the Alexandrian canon, it leaves the ideological apparatus that underpins it largely intact and “prevents them [the libretti] from fully coming to terms with the survival of colonial tropes of Levantinism in a Mediterranean reinscribed in terms of the North and the South.”

Halim shows what this “full coming to terms” might look like in the “Epilogue/Prologue.” As opposed to the derivative “postcolonial melancholia” of the contemporary “out of Egypt” Alexandrian emigrée memoir, she surveys a selection of vibrant “territorialized” instantiations of cosmopolitanism. These include Egyptian and Arab authors “writing back” to the canon (Salma Khadra al-Jayussi and Naguib Mahfouz on Durrell and Idwar al-Kharrat reading Cavafy, as well as her own readings of a 2012 novel by Tariq Imam (The Second Life of Constantine Cavafy) and two films based on Cavafy poems (Yusri Nasrallah, The City [1999] and Ibrahim El-Batout, Ithaki [2005]). Through these readings she points to the ways in which the crushed, wandering self and the voyage it must undertake—as well as the closed, imprisoning archive itself—can be rewritten to accommodate other kinds of love, attachments, and resistances that bring the ghosts of Alexandrian cosmopolitanism into the center of history.