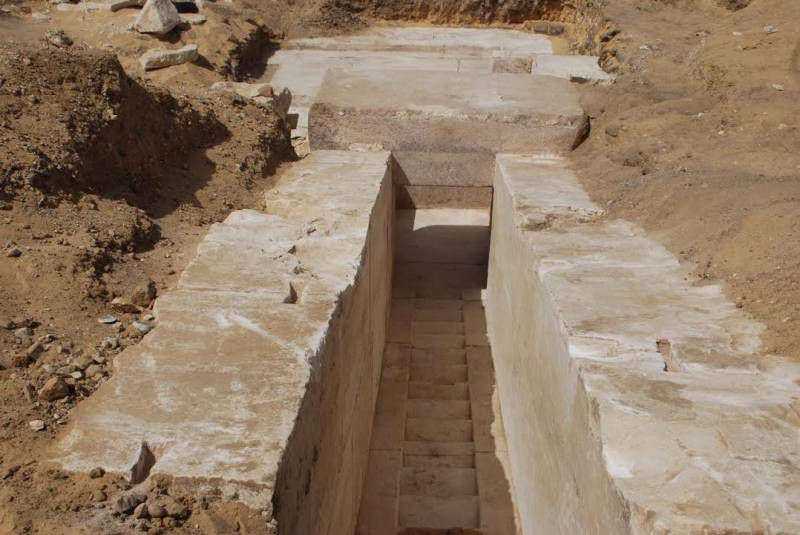 After thousands of years, researchers are still making incredible finds in Egypt (case in point, the giant statue unearthed in Cairo last month). Now, researchers have made another big find: earlier this week the Egyptian Ministry of Antiquities announced that a team of their archaeologists discovered the remains of pyramid dating back to the 13th Dynasty, which ruled about 3,700 years ago reports the Associated Press. The only problem is that an inscription indicates that the pyramid may have been built for a ruler that already has a pyramid next door.

The Egypt Independent reports that the remains were uncovered at the Dahshur Necropolis, an area about 25 miles south of Cairo on the west bank of the Nile. That area is home to what is considered to be some of the earliest pyramids including Sneferu’s Bent Pyramid and Red Pyramid.

While the pyramid-shaped upper section is gone, the substructure still remains. “The uncovered remains of the pyramid represents a part of its inner structure, which is composed of a corridor leading to the inner side of the pyramid and a hall, which leads to a southern ramp and a room to the western end,” Adel Okasha, the director general of the Dahshur Necropolis says in a statement, reports Owen Jarus at LiveScience.

Though the writing on the slab has not been translated by the Antiquities Ministry, Jarus shared images of the hieroglyphics with Egyptologists. He reports that two have said the writing is a religious text often used inside pyramids, and that the text appears to include the name of the pharaoh Ameny Qemau, the fifth king of Dynasty XIII, who briefly ruled around 1790 B.C.

That raises some questions, however, since Ameny Qemau’s pyramid was discovered in Dahshur in 1957, Aidan Dodson, a research fellow at the University of Bristol who has written about artifacts from that earlier pyramid, tells Jarus. He suggests one possibility for the discrepancy is that Qemau may have hacked out the name of a predecessor king and inserted his own name. That practice was common in the ancient world when a new ruler wanted to bury the memory of an enemy or unpopular ruler.

The AP reports that the Ministry of Antiquities plans to continue excavations and hope to find more evidence of which ruler or high-ranking official the pyramid belonged to.
(www.smithsonianmag.com)