The website of E.K.A. now “speaks” English and Arabic 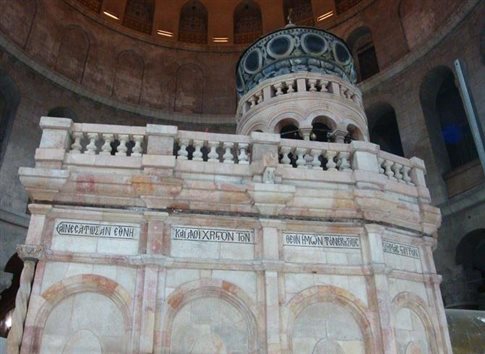 The restored tomb in which Jesus’s body is believed to have been interred after his crucifixion will be officially unveiled at a ceremony at the Church of the Holy Sepulchre in Jerusalem’s Old City on Wednesday.

A team of Greek scientists and restorers has completed the nine-month renovation project, which focused on a small structure above the burial chamber, known as the Edicule. It is the most sacred monument in Christianity.

“If the intervention hadn’t happened now, there is a very great risk that there could have been a collapse,” Bonnie Burnham of the World Monuments Fund, which had oversight of the project, told Associated Press. “This is a complete transformation of the monument.”

The delicate restoration was carried out by a team of about 50 experts from the National Technical University of Athens, which had previously worked on the Acropolis in the Greek capital and the Hagia Sophia in Istanbul. The conservators worked mainly at night in order to allow pilgrims continued access to the shrine.

In October, a marble slab covering the rock-carved tomb was lifted for the first time in more than two centuries, allowing restoration workers to examine the original rock shelf or “burial bed” on which Jesus’s body is thought to have rested. A small window has been cut into marble slabs to allow pilgrims a glimpse of the rock.

The team also repaired and stabilised the shrine with titanium bolts and mortar, and cleaned thick layers of candle soot and pigeon droppings. The work involved the use of radar, laser scanners and drones.

Wednesday’s ceremony to mark the completion of the restoration will be in the presence of Ecumenical Patriarch Bartholomew I, the spiritual leader of the world’s Orthodox Christians, and a representative of Pope Francis.

The Church of the Holy Sepulchre, in the heart of the Christian quarter of the walled Old City, covers the assumed site of Jesus’s crucifixion, burial and resurrection. It is a huge attraction for pilgrims and tourists from all over the world, many weeping and clutching precious mementos or photographs of loved ones and forming long queues for the shrine.

In a sign of the distrust between the different denominations, the keys to the church have been held by a Muslim family since the 12th century.

The shrine has been rebuilt four times in its history, most recently in 1810 after a fire. The structure had been held in place for almost 70 years by iron girders erected on the instructions of a British governor who ruled Palestine in the Mandate era. They have now been removed.

The $4m (£3.2m) cost of the restoration came from contributions from the six denominations which share custody of the church, King Abdullah of Jordan, the Palestinian Authority, and Mica Ertegun, the widow of Atlantic Records co-founder Ahmet Ertegun, who gave $1.3m.