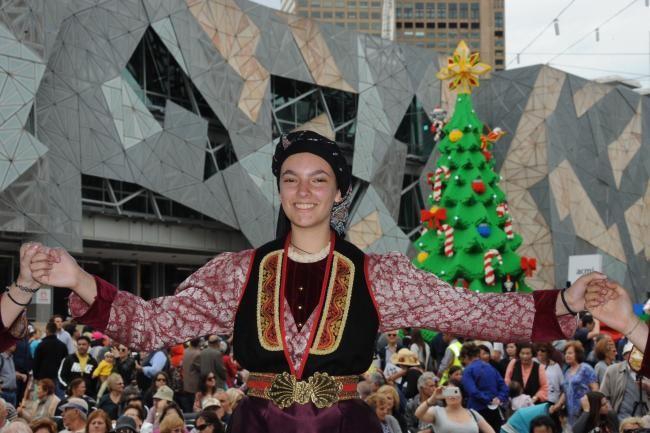 Thessaloniki Association in Victoria ‘The White Tower’ at 27 of November held its annual conjunction this year at Federation Square, celebrating the 32-year-strong relationship uniting Melbourne and Greece’s second-largest city.

“This year we’re celebrating 32 years of Sister-City relationships, and as Melburnians from Thessaloniki we are proud of our Melbourne and at the same time never cease to remember our city of origin,” vice-president Christina Despoteris said.

“Let us again celebrate our heritage, the cultures of both port cities, the ties that keep our peoples as defenders of freedom and the democratic way of life.”

The association’s festival this year featured artists, musicians and dancers from Greece and Australia and included also many more stalls.

“The festival takes place not only to honour our beloved Thessaloniki but also to highlight the beauty of Melbourne, the city we have chosen to call home,” she added.

“These entertainers, as well as many more artistic and cultural groups, will showcase the rich culture and traditions Greece is renowned for. Then the great White Tower will be surrounded by white flowers, a project which involved the whole Greek community of Melbourne and Athens. This is something not to be missed.”

The festivities commenced in the centre of Melbourne (city square), with a parade of musicians and dancers who sang, danced and entertained the crowds along the route to Federation Square, where they performed on the main stage. Esteemed guests from both Greece and Australia spoke at the festival.

Mr Staios went from Melbourne to Canberra, starting on the day of the 32nd Sister-Cities Festival at Federation Square, over a period of eight days (approximately 750km) with his support team, to raise money for the ageing Greek Australian community on behalf of Alzheimer’s Australia.

Further to the cultural happenings, attendees took part in drawing competitions, Greek dancing lessons or sample what a variety of traders have to offer. Food was, as always, one of the main attractions. This year the festival has taken on board the most mouth-watering souvlaki masters from Trojan Greek Food, the Cypriot Greek Grill, and Royal Catering gyros. Traditional desserts with a twist were available from Honey Dee, St Gerry’s, Taki’s Balls and Loukoumades. Procal Dairy yoghurt, Tornatoes‘ twisted potatoes, Kalloni little desserts island, Red Hill Marinade marinated lamb, Choo la la nuts and Greek coffee from Evan’s Café will also be waiting by the River Terrace, down the stairs along the Yarra River.

This year’s event has been made possible with the support of the City of Melbourne, the City of Thessaloniki, the Minister for Multicultural Affairs and the Victorian Multicultural Commission. Delphi Bank was the major commercial benefactor this year, while Neos Kosmos and the Greek Media Group: Ta Nea and Radio 3XY were media sponsors.