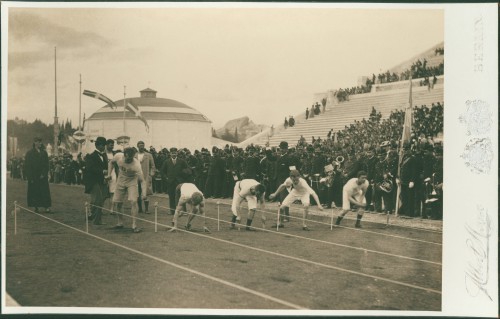 The Benaki Museum is launching its first crowdfunding campaign on the occasion of the exhibition in America of the photographic album of Albert Mayer from the first modern Olympic Games of Athens in 1896.

The exhibition kicks off in New York City in December 2016 with events at both the United Nations and the Consulate General of Greece. The campaign’s goal is to raise $100,000 which will allow the album to continue its 2017 tour in at least four additional US cities as Hellenes of Diaspora, Phihellenes, photo enthusiasts, Olympic memorabilia collectors and friends of the Benaki Museum have shown great interest in the exhibition. The campiaign will run until end of January.

US donors will receive a tax-deductible receipt and a special gift from the Benaki Museum.

How you can support the Benaki Museum fundraising campaign:

1) Donate: You can make a donation online by clicking on the “Donate Now” button above or by clicking here. You can also contribute offline by check or through a wire transfer. We will add the amount of your donation to the campaign’s goal (along with your name, if you wish so).

2) Share: You can help the Benaki Museum campaign by sharing it with family and friends using this link: http://crowdfunding.benaki.gr

3) Fundraise: You can also be part of our fundraising campaign by creating your own page as an Individual or Team (group of friends, corporate, media, etc.). You can set your own fundraising goal (i.e. $100) and invite others to help you reach your goal.

By supporting the Benaki Museum you contribute in the continuation of the largest depository of trust to some of the Greece’s most important art treasures spanning over 8.000 years of history in over 120.000 artworks dating all the way from the Paleolithic Era to the present.

Special Gifts for your Donation and Support:

Each donor will receive a special gift from the Benaki Museum including:

Teams and Individuals who will donate or raise an amount larger than $1,000, will receive:

Albert Meyer was one of the most famous photographers of that period and he traveled to Athens for the Games, becoming the official photographer of the German team. The Press announced the making of the Album before it had even commenced. The Greek newspaper of Trieste Imera (Day) as well as the Athenian Akropolis both wrote that the album would turn out to be the keepsake of the Games for the royal courts all over the world, as well as for the members of the Olympic Games Committee.

The 25 rather spartan photographs of the album capture the chronicle of the Games, beginning with the photograph of the International Committee and that of the Greek national benefactor Georgios Averof. The following photographs capture both the athletic rituals and efforts. The runners, the discus throwers, the shot put competitors and  gymnastics athletes who project the urban tradition of western European countries in exercises of acrobatic precision, follow the photograph of the Philharmonic Orchestra. The photographs with the rings, the pommel horse and the horizontal bars lead to the one of the Greek emblem of the Games, the Marathon runner, (water carrier by profession) Spyros Louis, who poses for Albert Meyer wearing a national costume after winning the First Marathon.

The photographic archive of Albert Meyer, including his photos from the Olympic Games, was destroyed in 1945, when bombardments flattened Dresden, Germany, hence turning the original photographs into rare and priceless artifacts.

The few copies of the leather album were distributed to the members of the Olympic Games Organizational Committee, amongst which was George Streit, banker and minister of the Greek government of the period. Marinos Yeroulanos, president of the Board of Trustees of the Benaki Museum for many years and grandson of George Streit, donated the album to the Historical Archives of the Museum. Since then, this unique Album is safeguarded with care as imposed by its rarity, being a unique token to both History and Art.

About the Benaki Museum

The Benaki Museum was founded by Antonis Benakis in 1930 and subsequently donated to the Greek state. It is the oldest museum in Greece operating as a Foundation under Private Law.

Situated in a set of six buildings open to the public, the Museum covers a broad section of the art spectrum, featuring 5 archival departments, an extensive library, over 500,000 objects of art, books, photographs, archives and rare documents.

The Museum welcomes over 150,000 visitors per year and offers a wide range of educational and cultural activities for all ages. With extensive collections covering several cultural fields and a range of activities serving various social needs, the Benaki Museum assumes a unique place as a complex institution among the broader network of museum foundations in Greece. By virtue of its collections, the Benaki Museum is best described as the museum of Greek Civilization in all its manifestations. In addition, it brings Hellenic Culture into dialogue with world cultures, as it accommodates significant collections of Islamic Art and Chinese Pottery, among others.

Every year, the Benaki Museum presents to the public a variety of temporary exhibitions and organizes conferences, lectures, and special events on subjects arising from the its collections and its vast range of activities.

The Museum has earned recognition beyond the Greek borders and made collaborations and partnerships with established cultural entities, including the Metropolitan Museum of Art in New York, the Royal Academy of Arts in London, the Powerhouse Museum in Sydney, the University of Oxford and Princeton University. Its collections feature in Europeana and Google Art Project, among many other digital platforms.

The main mission of the Benaki Museum is to inspire love for knowledge as well as to encourage people to reflect on world cultural heritage and human interaction across space and time. Following a policy of extroversion and democratization, the Museum provides open access to its collections and archives, thus promoting education, research and the exchange of knowledge. After years of intensive works the Museum’s social impact, as well as its resilience and self-sufficiency, have been firmly established.