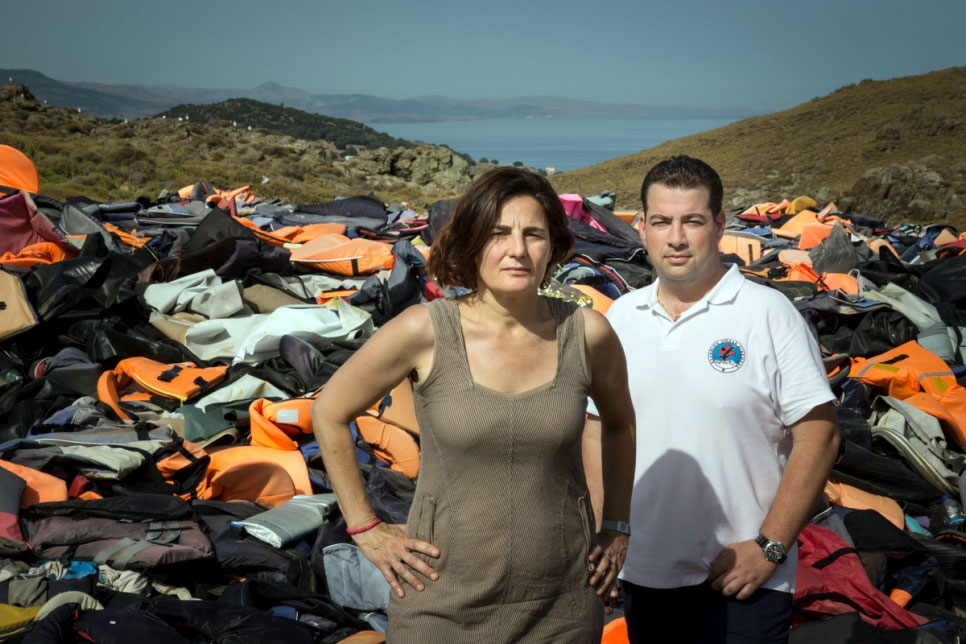 A Greek human rights activist and a Greek volunteer rescue team – Efi Latsoudi and the Hellenic Rescue Team (HRT) – have been jointly awarded this year’s Nansen Refugee Award for their efforts to aid refugees arriving in Greece during 2015.

“Hundreds of thousands of people fleeing conflict and persecution last year made the desperate bid to reach Europe in search of safety, many risking their lives in unseaworthy boats and dinghies, in a journey which all too often proved insurmountable,” the UN High Commissioner for Refugees, Filippo Grandi, said in a news release on the win.

“Both the Hellenic Rescue Team and Efi Latsoudi refused to stand by as they witnessed the dramatic humanitarian situation unfolding on their shores, and are fully deserving of the Nansen Refugee Award,” Mr. Grandi added. “Their efforts characterize the massive public response to the refugee and migrant emergency in Greece and across Europe, in which thousands of people stood in solidarity with those forced to flee, and the humanity and generosity of communities around the world who open their hearts and homes to refugees.”

According to a news release from the Office of the UN High Commissioner for Refugees (UNHCR), since 2007, Greece has been challenged by the arrival of a large number of refugees and migrants, but in 2015 sea arrivals escalated to an emergency. On the island of Lesvos alone, numbers topped 500,000 last year. In October 2015, arrivals peaked at more than 10,000 per day, as conflicts in Syria, Afghanistan and Iraq continued to uproot people from their homes.

“For many refugees, the heroic humanitarian efforts of Greek volunteers in 2015 went well beyond pulling survivors from the seas, they helped them to take the first steps towards a normal life,” UNHCR noted in a news release.

“During 2015 the HRT conducted round-the-clock operations to save refugees and migrants in distress at sea and Latsoudi showed compassion and care for the most vulnerable refugees arriving on the island of Lesvos through her work at PIKPA village,” the UN agency added.

The Nansen Refugee Award recognises outstanding service to the cause of refugees and displaced people, and was first handed out in 1954 – Eleanor Roosevelt was its first recipient and other awardees since then include former refugee Hawa Aden Mohamed of Somalia and Sister Angélique Namaika of the Democratic Republic of the Congo. It is named after Fridtjof Nansen, a Norwegian explorer, scientist, diplomat, humanitarian and Nobel Peace Prize laureate who served as the first High Commissioner for Refugees at the League of Nations, the predecessor of the United Nations.