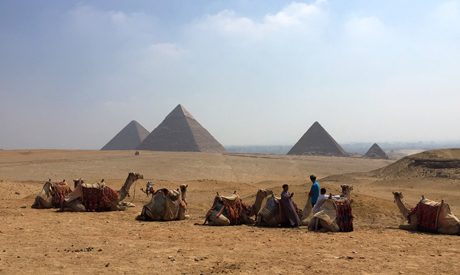 Egypt’s government has decided to hire private companies to manage, maintain and secure the area around the Pyramids of Giza, the Middle East News Agency (MENA) reported.

A meeting took place on Tuesday between Prime Minister Sherif Ismail and officials from the housing ministry, the tourism ministry and the antiquities ministry, during which the government announced the details of the pyramids development project, stating that a company has already been hired for EGP 5 million a year to maintain cleanliness the area.

Another company has been hired for security, and a third will be chosen for management.

The government also announced that it will increase tourism police in the area and will coordinate with the interior ministry to rebuild a nearby police station, as well as either renovate or relocate a hospital in the area.

Egypt has been struggling to revive its ailing tourism sector, which has suffered greatly after the political instability that followed the ouster of president Hosni Mubarak in 2011.

The crash of a Russian flight in Sinai late last year was yet another blow to the tourism industry. The number of tourists coming to Egypt dropped by 50 percent in the first half of 2016 compared to the same period last year, according to Egypt’s Tourism Authority.

Russia was among several countries to suspend passenger flights to Egypt after the crash, which killed 224 people on board. The crash was claimed by Islamist militants who said they planted a bomb on flight.