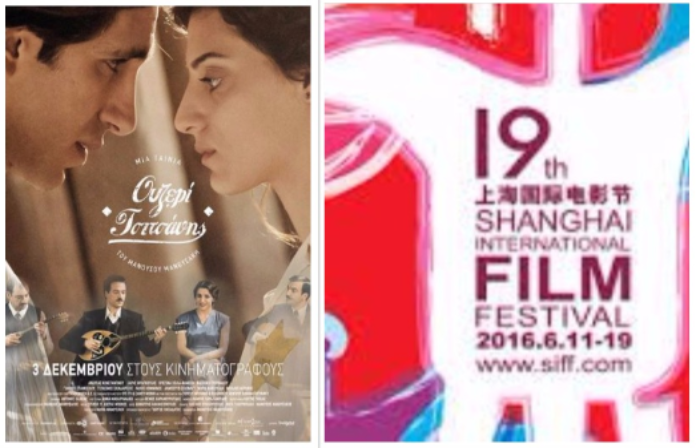 As part of the 19th Shanghai International Film Festival, held on June 11-19, 2016, the Greek movie Ouzeri Tsitsanis by Manousos Manousakis was selected for the Spectrum section, which keeps track of global cinema screenings. On the evening of June 13, at Cathay Theatre, the Chinese audience (together with members of the local Greek community) had the opportunity to watch the movie and take part in a post-screening discussion with the director.

Based on a book under the same title by Giorgos Skampardonis, the film takes place in Thessaloniki, Greece in 1942-43. The city is under German occupation. A love story between a Christian and a Jew, forbidden in these times, is used to describe the brutality and irrationality of racial discrimination. Ouzeri Tsitsanis, a taverna the composer Vasilis Tsitsanis runs, provides refuge to the couple and is a source of hope for people. It is also the place where Tsitsanis composes some of his well known songs. The Chinese title of the movie, “fuyun biri” (浮云蔽日), literally means “floating clouds cover the sun” but was translated as “Cloudy Sunday,” probably to reflect the English meaning of the famous Greek song Sinnefiasmeni Kiriaki.

Mr. Manousakis pointed out that both Greece and China have long history and this brings them together. He was curious to see if the movie touched the Chinese, since its topic is not part of their history. Members of the audience asked the director what was his source of inspiration, if it was difficult to find funding due to the Greek economic crisis and what his impression of Shanghai was, among other questions.

This was the second Greek movie in the festival, which also hosted the film Invisible by Dimitris Athanitis.