The Aleksandrinke: Slovenians in Egypt

The Aleksandrinke: Slovenians in Egypt 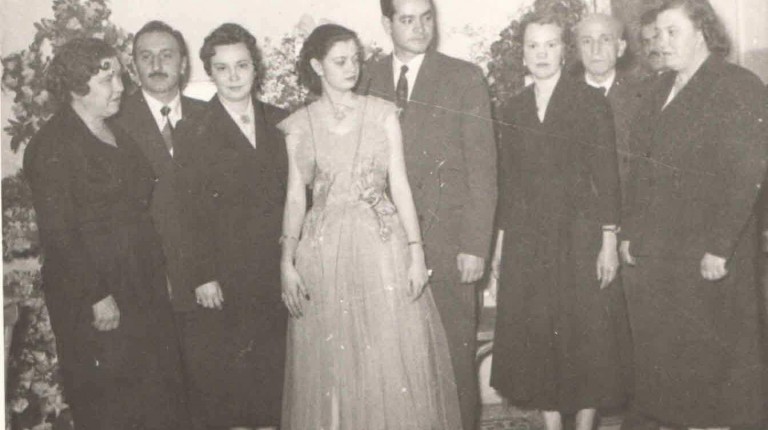 In a previous interview with Daily News Egypt, Slovenian ambassador to Egypt Tanja Miskova told the story of the Slovenians who migrated to Egypt in the 20th century in the face of the myriad of wars that plagued the former Yugoslavian countries at the time.  To settle in Alexandria, where many of the migrants started to rebuild their lives, was to find a place with a better standard of living and new economic opportunities.

The people of the Slovene region had seen their territory come under Italian rule after World War I, followed by an intense process of italianisation under fascism. When they immigrated to Egypt, many of the Slovenian women found employment as domestic workers in the households of Alexandrian-Italian families, with whom they shared a linguistic commonality. Notable Egyptian statesman and former UN secretary-general Boutres Boutres-Ghali was nursed by a Slovenian woman named Mijlena.

Most Slovenian men who came to Egypt, at the time, worked as electricians.

This vibrant and important aspect of Alexandria’s history, with its influx of Slovenian immigrants, produced a phenomenon known as Aleksandrinke.

The Slovenian Embassy in Egypt, with the collaboration of the ambassador and her assistant Christian Samir, facilitated the following interview with the granddaughter of a Slovenia woman who found herself in Alexandria in the middle of the 20th century. What follows is an abridged version of a conversation with Salwa Hegazy and her daughter, Amira. Salwa’s grandmother left Slovenia in the interwar period and arrived in Alexandria in 1932. Hegazy has established a social club for the descendents of Slovenian immigrants in Egypt.

How did your grandmother come to Egypt?

Salwa Hegazy: My grandmother was from Nova Gorica, located in western Slovenia on the border with Italy. She was born in the city of Bilje. Her family had a farm and they were kind of well off. My grandmother was married and had a daughter, but unfortunately all the men of the family were drafted by the Italian army as there were many wars. There were no men to help the family in their work on the farm. Moreover, the situation was not safe. So, around 1932, my grandmother, her mother, her sister and her daughter travelled to Trieste, in Italy. From there, they took a boat and came to Alexandria. At the time, Alexandria was full of foreigners including a large number of Italians. Also, the Slovenian community there was quite large as they had started heading to Egypt around 1800.

My grandmother’s sister found a job as a receptionist in a hotel called Cecil because she spoke more than one language including Italian and German.   I am not sure if my grandmother also worked there or not, as her daughter was only five years old.

Is the Aleksandrinke phenomenon known in Slovenia?

Amira: my teacher [referring to the teacher who taught her Slovenian in a summer camp in Slovenia], which was also from Nova Gorica, knew about this phenomenon and asked me to send her some stuff regarding this phenomenon as her students study it.

SH: When I was visiting my grandmother’s city, I read an announcement by chance about making a march of solidarity that would be similar to that which my grandmother along with other Slovenians made to Trieste, from which they took boats to emigrate to cities all over the world. It was a nice surprise that they still remembered my grandmother’s people and still were making something for them.

How did Slovenians preserve their culture in the face of conflict?

SH: I recall a past incident when Slovenians tried to print Slovenian-language books [during World War II]. To this end, they wanted to establish a printing house faced with Germans [who controlled parts of the Slovenian territory at the time] who eventually eliminated 25% of the Slovenian cultural and education elite. To get around German control, Slovenians resorted to smuggling their books in barrels of wine, to allow people to read them, to preserve their identity and language. As you can tell, Slovenians spent their lives fighting to preserve their language and identity.

As far as I know, Egypt’s relation with the former Republic of Yugoslavia was very good, especially with former Yugoslavian president Josip Broz Tito.   What about the presence of Abdel Nasser in Slovenia?

SH: When I went to Villa Bled in Slovenia, visited by Abdel Nasser, they still preserve a photo of him with Tito. I took a photo of it. Despite this strong relation, it is sad that people here now barely know about Yugoslavia. Moreover, they do not know about its separated countries. I remember when I went to present the papers regarding the Slovenian Club in Egypt at the Ministry of Social Solidarity, people, there, thought it was Slovakia instead of Slovenia. If you tell anybody here about Slovenia, he will not know anything about it. People know about Slovakia but not Slovenia.

The Slovenian ambassador to Egypt Tanja Miskova told Daily News Egypt that Slovenians in Argentina have very strong community and they place a strong emphasis on their children’s learning. Slovenians in the US, however, have assimilated into the dominant culture, and largely lost their historical identity. Can you tell us more about the Slovenian community in Egypt and the Slovenian Club that you are establishing?

SH: At the beginning, I did not know that the Slovenian community in Egypt is not very large. As they were very prominent in Alexandria in the past, I imagined that there would still be many of them here. When I asked in the embassy they informed me that the number has diminished significantly. Nonetheless, the embassy offered to help me despite being tempted to give up as I was disappointed.

I would like our children to know about their origins. Slavs, especially Slovenians were separated and forced to migrate in the face of many wars. So Yugoslavians, especially Slovenians tried to establish their own clubs in their new countries, where they could gather and preserve their culture and identity. You can find many Slovenians in Australia and Canada. There is a very big community of them in Argentina. Slovenia’s domestic population is 2 million, while, abroad, you can find 4 million Slovenians. A club for Slovenians helps to reunite the Slovenian diaspora.  This is why I would love to do something here. In the end, even if the number of Slovenians is not very large in Egypt, I would like to establish a club for us.

Can you tell me more about the club and its members?

Can you tell us about the bureaucratic difficulties the club has faced?

SH: In order to establish an official place to meet, we have faced difficult bureaucratic procedures.  I do not know why it is taking is so long to approve the establishment of the club. I presented the papers and documents in May 2015. The idea came to me even a year before but I did not know to whom I should go. So, I went to the embassy with my grandmother’s birth certificate and her Yugoslavian passport which she had renewed until her death.  The embassy helped us to establish legitimacy.

We started as 17 members when we firstly admitted the papers to Ministry of Social Solidarity and currently we have reached 35 members.

Does the club aim to spread the Slovenian culture among Egyptians?

SH: At the moment, no. We are a closed group of Slovenians, and one of our primary aims is for our children be connected to Slovenia. Perhaps, in the future, we might organise conferences to present Slovenian culture to the Egyptian public. The problem is that the country is small and nobody knows much about it. One thing I am happy about is that in Alexandria’s last film festival, Slovenian movies were shown.

How about your Slovenian language?

SH: My grandmother, aunt, mother and their friends used to talk between themselves in Slovenian. It was their secret language. My mother spoke Slovenian fluently. She also spoke French, as she was educated in a French school, and Italian, as her cousins spoke Italian, as well. She used to speak with my father in Italian. Slovenian is not a common language here and it is a bit difficult. I can only understand sentences and say short sentences, but I cannot speak fluently.

How did your daughter Amira come to learn Slovenian?

She was excited about my grandmother’s stories that I used to tell her and about our Slovenian origins.

I knew of a programme based in Slovenia that organised a annual summer camp for children with Slovenian origins who live abroad. Children can participate in the camp until the age of 14, coming to Slovenia to see the country and learn the language. Last summer, Amira applied and joined the camp. She enjoyed it a lot and she was interviewed on a Slovenian TV programme. She became more attached to the country, its language, and culture. Also, her brother became more attached as they were experiencing the stories they had heard from us when they were younger. When in Slovenia, my sons told others at the camp stories about Egypt, so I was happy about this intercultural connection between the two countries.