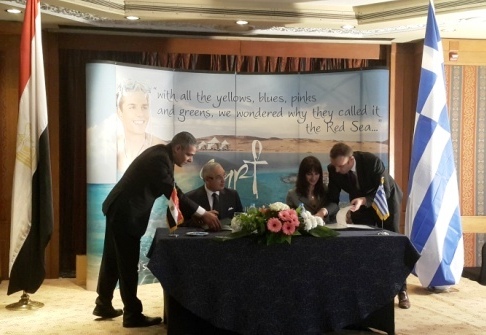 Minister of Tourism Hisham Zaazou and his Greek counterpart Elena Kountoura signed on Monday 22/2/2016 a Memorandum of Understanding (MoU) on tourism cooperation between the two countries.

At a joint press conference following the signing ceremony, the minister asserted that the agreement is an important step and a cornerstone for tourism relations between the two countries.

The Greek minister, for her part, voiced happiness at visiting Egypt and expressed her admiration of the Egyptian civilization and the warm welcome she has received in Egypt.

Kountoura also noted that her country welcomed the measures taken to bolster bilateral relations and beef up existing relations in all domains.

She said the MoU will encourage both countries on exchanging information, campaigning for promotion programs and working jointly for the sake of flourishing their tourism markets in both countries.

The agreement will also ease investment measures for Greek and Egyptian businessmen to carry out joint tourism projects, she added.

The Tourism Promotion Authority has prepared a tourist program for the Greek minister and her accompanying media delegation that will include tours in the main tourist sites in Giza Pyramids, the Egyptian Museum and other tourism locations.