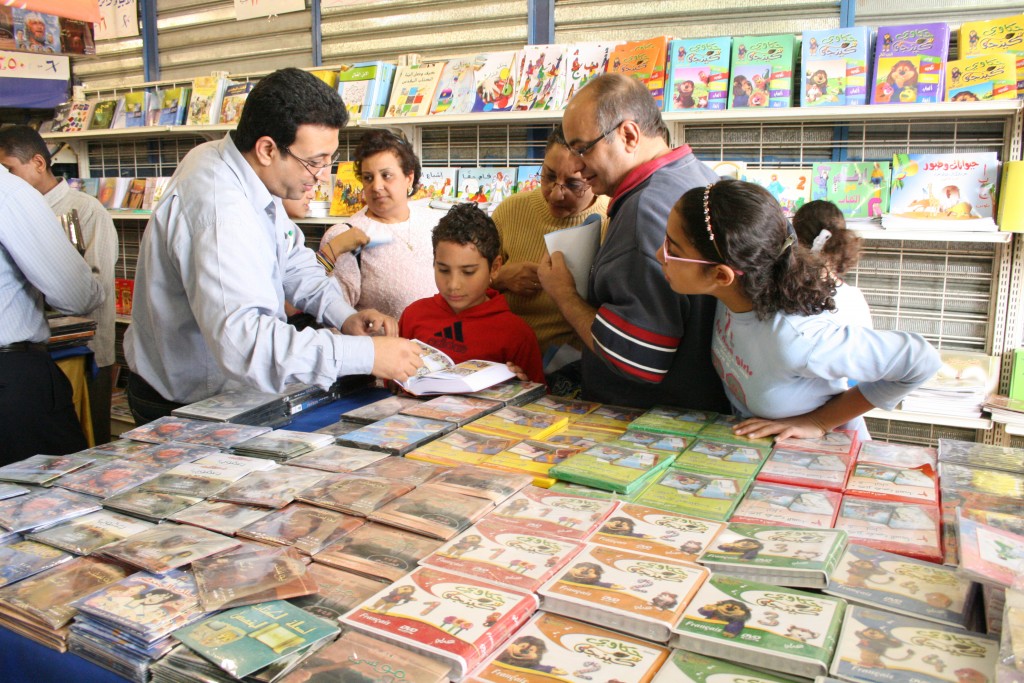 The 47th annual Egyptian Book Fair, which kicked off on January 27 and comes to an end on February 10, brought a unique mix of events, initiatives, seminars and newly published authors.

In addition to inviting Bahrain as its guest of honor and hosting a total of 850 publishers in the famous “Soor Al-Azbakeya” location, the book fair was used as a launch pad for governmental initiatives and the introduction of recently published authors.

In addition to hosting a total of 850 publishers – including 50 foreign publishers – Bahrain was named the guest of honor at the fair and highlighted their participation through documentaries and seminars about the history of Bahrain.

The widely popular book fair, which adopted the theme of “Culture in Confrontation” this year, was also used as a launch pad for initiatives and the introduction of recently published authors to the general public.

“BREAD AND A BOOK” INITIATIVE

One of the prominent initiatives unveiled this year, dubbed “Bread and a Book,” launched by a foundation called “Batana” gave a 90 percent discount on any book to any citizen who holds a supply card.

In a statement released during the first week of the fair, the Minister of Supply and Internal Trade Khaled Hanafy said that the initiative aims to build a connection between books and bread, stating that these two components are equally important for further development and that this is the true meaning of “Bread and Freedom.”

Hanafy said that this collaboration between the government, private sector and civilians served to motivate civilians to make use of subsidies while also promoting cultural awareness.

According to Atef Ebeid, president of Batana, the foundation and the ministry will be collaborating in setting up booths across many governorates to continue this initiative after the book fair ends.

“No one went to our booth in the book fair and didn’t get a book unless they didn’t like it, however, we are trying to vary from the types of books we offer by surveying people about the topics they would like to read about so we would provide such books in the near future,” Ebeid told Egyptian Streets.

One of the initiative’s slogans is “reducing acts of terrorism starts with the citizens’ minds,” which is what Ebeid says the initiative is attempting to achieve by cooperating with the National Translation Center and the Supreme Council of Culture to develop comprehensive strategies.

“Someone who is throwing a rock in an act of violence, definitely must be doing this based on a concrete thought in his/her mind, and the only way to try to reshape that thought will be through books, enlightening this reader through many different topics including nationalism, forgiveness, collaboration, and peace delivered in a very general manner that will fight religious polarization,” he added.

Ebeid also announced a new initiative that aims to provide a book free of charge to citizens who manage to save up on the greatest amount of bread, adding that this is the real idea that ties bread and books together.

The fair was stacked with many authors and publishers, including young and newly published authors who highlighted the importance of youth engagement in creating new methods of expression.

Newly published authors Salma Abu Zeid, author of “The Willow of Half a Fugitive Spirit of Eternity” and Ahmad Farghaly, author of “Escapism,” both encouraged Egyptian youth to broaden their knowledge of poetry and theater through reading.

“To be a newly published author feels great; not only because it was my ultimate dream for a couple of years now, but also because I’ve always wanted to communicate my voice more to the people who read,” Abu Zeid told Egyptian Streets.

She also wishes to add a great sense of understanding through her books as she thinks that is what Egyptian culture lacks and is short on acceptance of various types of art.

“It felt great once the book was published and people got it and read it. Then I felt the responsibility of proving what I am capable of doing with my upcoming works in the field, as I have to deserve the title of ‘author,’” Farghaly said

Farghaly said he hopes to promote the concept of questioning in Egyptian culture and that, through his books, he seeks to encourage readers to think independently and come to their own conclusions.

Both authors are working on new books they wish to deliver to readers: Farghaly is intending to release a novel and a screenplay for a movie that depicts one of the stories he wrote about in “Escapism,” while Abu Zeid is working on a new novel that carries different themes.

The Egyptian book fair is an annual event that takes place in Cairo and is organized by the minister of Culture. This year it hosted 21 Middle Eastern and African countries, including an additional of six more countries than last year.

The fair also included 30 seminars this year hosted by prominent figures such as Farag Foda, Nasr Hamed abu Zeid, and journalist Hassanein Heikal, and aired documentaries about the Egyptian military’s achievements on a daily basis through its cinema halls.